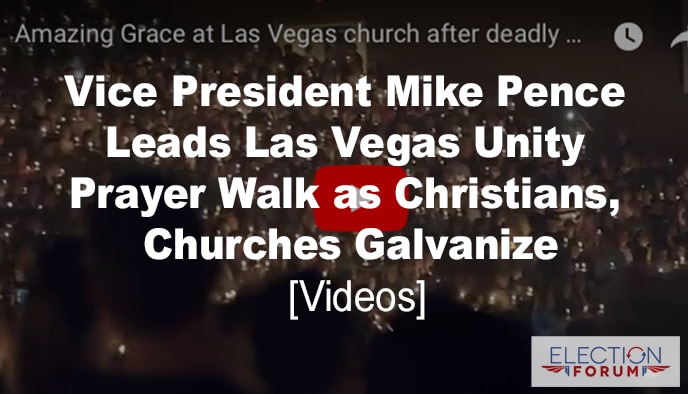 Now the walk carried deeper meaning, and a message of God’s love and healing.

“We stand with you, to pray with you for strength, comfort, and healing in the wake of Sunday night’s horrific attack … In America, we mourn with those who mourn and we grieve with those who grieve.

“The Bible tells us that “The Lord is close to the broken-hearted,” and this will be our prayer for all of you.

“And as I read in my devotions this morning, love binds all our virtues together in unity.”

And Las Vegas is united.

God’s people responded to a city shaken to its core by a horrendous tragedy.

This is something the government could never do.

In the aftermath of the worst mass shooting in our country’s history, churches in Las Vegas urgently geared up to deal with the human suffering that followed.

The need for blood was tremendous as more than 500 injured concertgoers were hospitalized.

Churches encouraged members to give blood, and by the day after the shootings, blood banks were unable to keep up with the crush of donors.

One line at a blood service facility wrapped around the block twice. Some people waited hours to give blood.

International Church of Las Vegas was part of the massive effort to rally as many churches as they could to deal with the crisis.

Their plan was simple. They mobilized churches to:

Megachurches such as Canyon Ridge and Central held special services so that Christians could gather to worship and pray over the city.

There was an incredible outpouring of the Holy Spirit.

The Lord does work in Sin City.

“But where sin abounds, grace abounds much more.”

Las Vegas churches are living up to the Great Commission. They are a witness to God’s great love.

Churches, such as Central, are accepting donations to aid victims through its Hope for Vegas fund. CLICK HERE to donate.

Donations can also be made through the city’s GoFundMe page, which has collected over $10.4 million. CLICK HERE to donate.

Watch this powerful, short video on a candlelight service at Canyon Ridge church in Las Vegas.

Watch this insightful 2-minute video on “Lou Dobbs” as Pastor Jeffress takes on the topic: Why would God allow such a massacre?