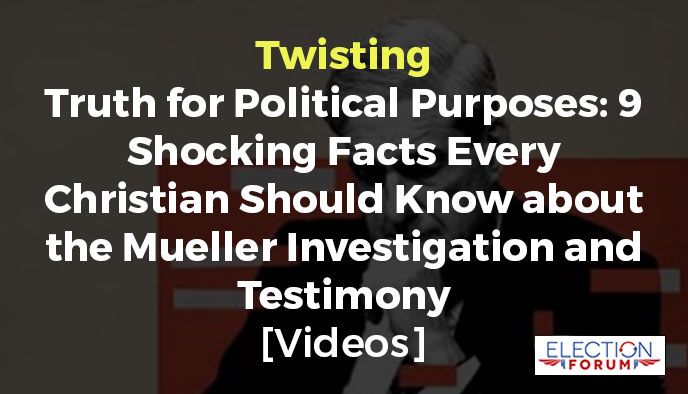 And you should be upset about how embarrassing Mueller’s congressional testimony was for the Democrats who demanded that he appear before the House Judiciary Committee and the House Intelligence Committee.

It’s now clear – after Mueller’s 6 hours of testimony – that the investigation into Russian interference in the 2016 election was highly partisan, highly biased, and highly political…

It was an investigation in search of a crime…

Here are 9 facts you should know about this unprecedented and historic investigation:

All the political hype and innuendo of the media and the progressive Democrats that Trump was a puppet of Vladimir Putin and the Russian government was proven false.

It was political rhetoric at its worst. Many people were misled by twisted media reports and outright media lies…

No proof was ever offered to corroborate the “intelligence community assessment” that the Russians favored Donald Trump over Hillary Clinton and that they “wanted Trump to win.”

This was a lie perpetrated by the media and by 3 avowed Trump haters and Clinton supporters:

He never once during the investigation claimed executive privilege as a means of withholding information from Mueller’s team of partisan Democrat prosecutors.

He gave the Mueller team unprecedented access to White House staff … to his personal advisors … even to his personal lawyer – who, by the way, was questioned for more than 30 hours!

President Trump turned over 1.5 million documents – everything the Mueller prosecutors asked for.

Who wouldn’t be?  If you were being accused by the progressive Democrats and the biased media of committing crimes you didn’t commit, you’d be upset too!

There was no crime … just innuendo after innuendo.

The words “exonerate” and “exoneration” are not found in any Department of Justice policy or in any legal statute.

In no legal proceeding or court case has anyone ever been exonerated. Such language has never been used before

The presumption of innocence – the bedrock of our justice system … and something to which every American citizen is entitled – was thrown out the window throughout the entire investigation.

It became clear during his questioning by the House Intelligence Committee and the House Judiciary Committee that Mueller wasn’t familiar with what was in his own report.

Both Democrats and Republicans on the two committees were shocked and frustrated at Mueller’s bumbling testimony … and at his apparent lack of knowledge about specific information in the report.

The unverified Steele dossier was presented to the FISA court as a verified and corroborated intelligence product.

It was used to obtain a FISA warrant to spy on Trump campaign advisor Carter Page – and to obtain two renewals of that 90-day warrant. We wrote previously about the FISA abuse here.

Just as shocking – if not more so – is that FBI Director James Comey met privately with president-elect Trump at Trump Tower in New York 2 weeks before Trump’s inauguration … and briefed him on the “salacious” and “unverified” nature of the Steele dossier. This after the dossier had been presented to the FISA court as verified intelligence!

It is also now known that Comey’s briefing of Trump took place one day after the FBI director met with President Obama, Vice President Joe Biden, National Security Director Susan Rice, National Intelligence Director James Clapper and Deputy Attorney General Sally Yates in the Oval Office to discuss how to brief the president-elect on the dossier.

The original mandate of Special Counsel Mueller and his investigative team was to look into Russia’s interference in the 2016 presidential campaign.

It involved collusion and coordination between:

The purpose of this conspiracy was to slander Trump two weeks before the 2016 election to convince voters that Trump was unfit and unworthy to be President of the U.S.

Robert Mueller ignored all of this in his investigation of interference in the 2016 presidential election.

They have consumed 3 years of legislative time … and spent approximately $35 million of taxpayer money in hopes of finding cause to impeach President Trump.

Even after the disastrous Mueller testimony, Speaker of the House Nancy Pelosi still believes Vladimir Putin has “something” on President Trump that can be used to blackmail him – something either political, financial … or personal.

The progressive Democrats hate President Trump so much – and want him removed from office so desperately – that they are ignoring the needs and priorities of the American people and focusing all their energy on trying to perpetuate a false narrative that will drum up public support for impeachment.

For 3 years – since the personal and electronic surveillance of the Trump campaign began in July 2016 – very serious accusations have been made against Donald Trump:

Treason is a capital offense punishable by execution. If someone accuses the President of the United States of treason, he or she had better have solid proof of it – or suffer consequences for making serious false accusations.

Those who have perpetuated the lies about President Trump without providing hard evidence should be forced to leave Washington, D.C. They should not be allowed to lead the country any longer…

And what happened to President Trump over the past 3 years should never be allowed to happen to any other president.

Watch this video suggesting what should happen to these accusers (8 ½ minutes).

Watch this informative video of Congressman Jim Jordan questioning Robert Mueller … and Mueller refusing to answer questions about why only Trump associates were charged with making false statements to the FBI, when the foreign professor who precipitated the entire investigation and lied 3 times to the FBI was not charged with a crime (about 5 minutes).

Watch this video about why Robert Mueller was never in charge of the investigation … and what should happen next to make sure this kind of attack on a duly elected president never happens again (4 ½ minutes).