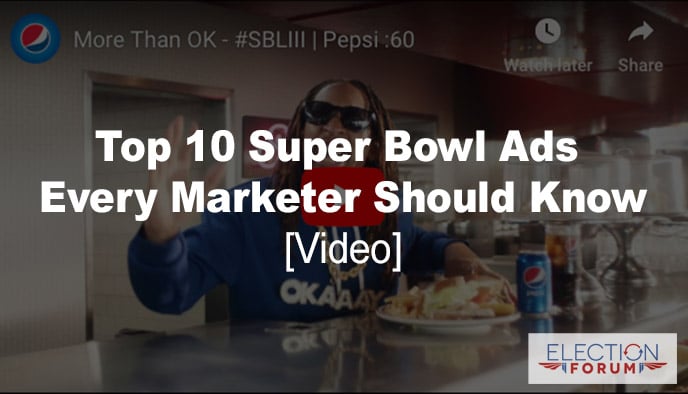 The Super Bowl game this year was a let-down … unless you are a Patriots fan, and you like low-scoring games dominated by defense.

But many people watch the game every year just to see the commercials. The ads are highly anticipated … and have a significant impact on culture – and sometimes, they even make political or religious statements.

This year, many of the Super Bowl commercials were very funny. People still love to laugh, and love to be entertained.

But a few were bizarre – and a couple, downright offensive, especially to Christians and Conservatives.

This year, the Super Bowl ad lineup gave us insight into our culture right now … and told us what we should know as Christians right now.

Let’s take a look at 10 Super Bowl ads that every Christian should know about – the most talked about, the most entertaining, the most controversial – and sometimes offensive.

“More Than OK” took on the line that servers ask at restaurants when Coke isn’t available – “Is Pepsi OK?” and argued that Pepsi is “More Than OK”! It featured comedian Steve Carell and rappers Lil John and Cardi B … and was certainly clever and entertaining.

Pepsi’s fun, upbeat commercial shows us that people still love to laugh, and that music stars have a lot of pull and influence … especially rapper Cardi B, who has been featured in other large-scale marketing campaigns, including Amazon Alexa.

“Human Canine Show” had nothing to do with avocados. The ad showed a role reversal of humans and their pets in a dog show, with the grand prize being a table full of avocados. Very odd – but memorable.

People respond to quirky humor … and, they love their pets.

One of the most talked-about ads, the commercial played on the wild popularity of the TV show “Game of Thrones” – a fantasy drama with a medieval twist. It’s also a pretty violent and graphic television show…giving us disturbing insight into what people want to watch at the end of the day.

“What’s for Dinner” was funny and relatable, following a texting conversation between a couple about “what’s for dinner.”

At the end of the commercial, on-screen text pops up: “Get What You Want – Free Tacos Every Week.” From a marketing perspective, this was the best ad. People love free stuff…and they love to eat.

Hyundai’s “The Elevator” showed an elevator bringing people to different levels of misery, including the middle seat on an airplane, jury duty and car shopping.

The ad was great because every viewer – no matter their age or background – can relate to how miserable these things are.

#6: “Not Everything Makes the Cut” – Amazon Alexa

“Not Everything Makes the Cut” showed the hilarious (fictional) consequences of what happened when Amazon employees put “Alexa” voice technology into different appliances and machines.

The ad spoofed the accidental “global impact” of Alexa at the end – hinting at Amazon’s incredibly powerful influence.

“Expensify This” relied on a bizarre, big-production commercial that showed an over-the-top parody of the life of a wealthy rapper. The ad was slightly disturbing because it showed the decay of traditional values. For example, it showed a rapper “marrying himself” … and an assistant with a “third eye” – a New Age belief.

I love streaming services. But after seeing Hulu’s commercial for the Super Bowl, I’ll stick to Netflix and Amazon. Hulu’s commercial parodied Ronald Reagan’s classic “Morning in America” speech, giving it it an ugly twist for a teaser for the TV show, “A Handmaid’s Tale.”

The feeling was that the speech would be given in an authoritarian, dictatorial society where no one has any rights. Finally, the ad ended with a Cross that is meant to look sinister.

Hulu made a terrible decision with this ad – They alienated a giant part of the population, including Conservatives and Christians.

It’s clear that the media and journalism have become extremely politicized and biased, especially against President Trump. But Washington Post attacked this reality with their controversial ad, “Democracy Dies in Darkness.”

This ad was just one more proof of media manipulation and collusion to indoctrinate people into thinking that news stations are unbiased … and if anyone disagrees, they are fighting against “truth.”

Skechers’ commercial for their slip-on footwear featured Tony Romo – an ex-NFL quarterback explaining why he loves his Skechers slip-ons. The ad was clever and entertaining, and it featured some futuristic technology that could very well become reality in the next few years (such as a floating device that carries drinks).

Some Super Bowl ads were downright offensive, and alienated Christians.

Hulu’s anti-God commercial, for example. Another company – Zaxby’s – ran an ad making fun of Chick-fil-A for being closed on Sundays…mocking Christians.

Others were simply pure entertainment.

And many of them featured celebrities: musicians, comedians and actors.

Of course, we also saw a lot of technology in the ad lineup: Amazon’s Alexa…smart phones….and even technology that doesn’t exist yet.

As far as actual advertising goes, the ads were not successful. Most were pure entertainment: They didn’t sell anything or give the viewers anything to respond to.

At $5 million a slot, this was a major waste of money.

What did you think about the Super Bowl ads? Email me at craig@electionforum.org.