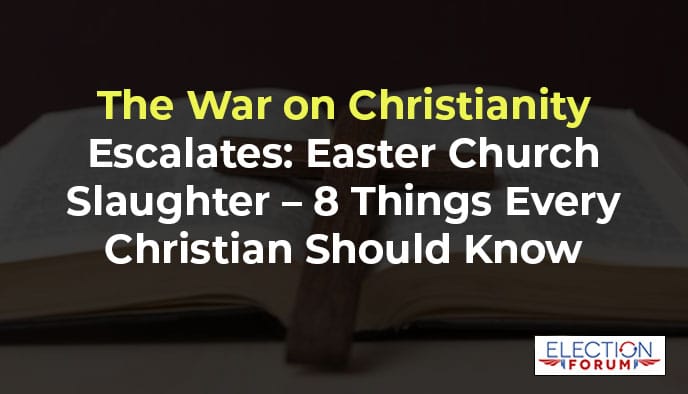 Three hotels where many Christians had traveled to celebrate … bombed.

Here are 8 things every Christian should know about what’s happening to their brothers and sisters in Christ.

The Christian population in Sri Lanka is under 10%.

Historically, Christians have been harassed, attacked or terrorized by the Buddhists … which comprise 80% of the population.

And historically, the 10% Muslim population and 80% Buddhist population have been hostile to each other.

But this attack was a carefully planned and coordinated attack against Christians by Islamic suicide bombers.

The massacre consisted of 8 simultaneous suicide bombings of churches and hotels at approximately 8:45 a.m. on Easter Sunday on the island nation off the coast of India.

Bombs were detonated in 3 luxury hotels filled with Christians visiting Sri Lanka for the Easter holiday. The other bombs exploded in churches during Easter worship services.

ISIS claims the bombings were in retaliation for the shootings at 2 mosques in Christchurch, New Zealand last month. But that attacker was not a Christian.

The government had received credible information that terrorist attacks against churches were being planned… but they did nothing to increase security at churches or to warn church leaders and church goers.

In a shocking public statement, Rauff Hakeem – Sri Lanka’s justice minister – stated, “We regret the fact that the knowledge regarding impending attacks on churches, which was made available through intelligence agencies, was not relayed to the Archbishop … which … could have prevented this mayhem.”

Hakeem is a member of the Sri Lanka Muslim Congress (SLMC) political party.

Hillary Clinton, Barack Obama and others have called the victims of this terrorist attack “Easter worshippers.”

What? We worship Easter now?

The mainstream media and politicians also refused to report that the attacks were carried out by ISIS-affiliated Islamic terrorists.

“@POTUS and I are monitoring the horrific attacks on those celebrating Easter in Sri Lanka. Our hearts & prayers are with the victims & their families. This atrocity is an attack on Christianity & religious freedom everywhere. No one should ever be in fear in a house of worship.”

“The United States offers heartfelt condolences to the great people of Sri Lanka. We stand ready to help!”

The President of Sri Lanka declared a national emergency … which allowed police to arrest and interrogate suspects without a court order.

A cabinet spokesman said, “We do not believe these attacks were carried out by a group of people who were confined to this country. There was an international network without which these attacks could not have succeeded.”

In one Easter Sunday School class at Zion Church in Batticaloa District, children were asked by the teacher, Caroline Mahendran, to raise their hands if they were willing to die for Christ.

“Everyone raised their hands,” she said. “Minutes later, they came down to the main service and the blast happened. Half of the children died on the spot.”

Other stories are emerging of people walking away from the church just before the blast – or being late to the Easter service at Zion Church – and being spared.

Add Sri Lanka to the growing list of countries in which Christians are increasingly targeted for destruction of church property, torture, terrorism and murder.

Here’s a list of just a few of the countries in which persecution of Christians is escalating:

Open Doors USA – a group that helps persecuted Christians around the world – estimates that violent attacks on Christians doubled between 2017 and 2018.

You may recall that nearly 50 were murdered in Cairo on Palm Sunday 2017 by suicide bombers who specifically targeted Coptic Christians.

And a week before Christmas of that same year, 9 Christians were killed at a Methodist church in Quetta, Pakistan by suicide bombers linked to ISIS.

In Nigeria alone, thousands of Christians are slaughtered each year … and churches and entire villages are burned to the ground.

Yet believers – through the power of the Holy Spirit – continue to praise and trust God.

One local pastor – despite unprecedented persecution – said, “… we know our God will never disappoint us.”

This pastor knows that God is sovereign and is in control even in times of intense persecution and suffering.