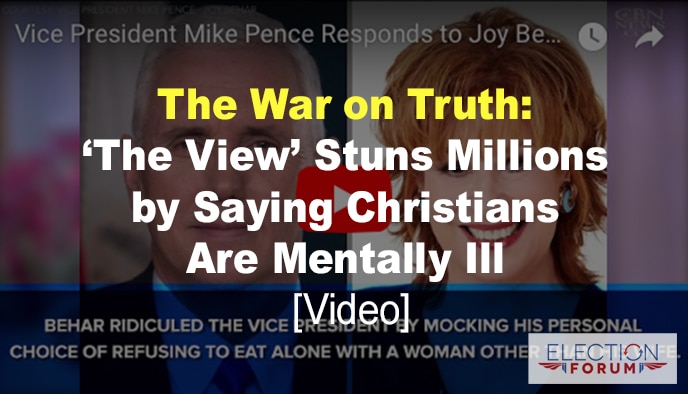 The vocal and vicious attack on the mental competence of Christians is growing and intensifying … we’re seeing and hearing it more and more from:

Commenting on The View on what Omarosa had said, Joy Behar added, “It’s one thing to talk to Jesus. It’s another thing when Jesus talks to you. That’s called mental illness if I’m not correct. Hearing voices.”

After laughing at Ms. Behar’s ridicule, co-host Sherri Shepherd said, “As a Christian, that’s just par for the course. You talk to Jesus, Jesus talks back.”

Then she also joined in on the mocking: “What concerns me is, how long is the conversation with Jesus?”

To her credit, Meghan McCain – the lone conservative co-host on the show – disputed Ms. Behar’s diagnosis and claimed that Jesus speaks to her every morning.

But it was too little, too late…

The public ridicule and mockery of Christians is sad … but growing.

What unbelievers don’t realize is that both Jesus and God the Father are speaking directly to them all the time – and to all people – in two distinct ways:

But they aren’t speaking in audible “voices” as Ms. Behar falsely assumes.

Here are a couple of examples of Jesus speaking to Ms. Behar – and to all of us – through the natural world:

“The heavens are declaring the glory of God; and their expanse shows and proclaims His handiwork. Day after day pours forth speech, and night after night reveals knowledge. There is no [audible] speech, nor are there words. Their voice is not heard. Yet their voice goes out through all the earth, their sayings to the end of the world.” (Psalm 19:1-4a)

“…that which is known about God is evident within them, for God made it evident to them. For since the creation of the world His invisible attributes, His eternal power and divine nature, have been clearly seen, being understood through what has been made, so that they are without excuse. For even though they knew God, they did not honor Him as God, or give thanks; but they became futile in their speculations, and their foolish heart was darkened. (Romans 1: 19-21)

And here are a couple of examples of Jesus speaking through the special revelation of scripture:

“God, after He spoke long ago to the fathers in the prophets in many portions and in many ways, in these last days has spoken to us in His Son, whom He appointed heir of all things, through whom also He made the world. And He is the radiance of His glory and the exact representation of His nature, and upholds all things by the word of His power.” (Hebrews 1:1-3a)

Vice President Mike Pence responded by saying Ms. Behar’s mockery is “evidence of how out of touch some in the mainstream media are with the faith and values of the American people.”

Within a week, 25,000 people had called ABC to complain about Ms. Behar’s remarks … prompting her to say she didn’t really think Christians were mentally ill – and that “It was a joke.”

Those who equate Christian faith with mental illness make several assumptions that have no basis in fact:

On the contrary, the apostle Paul, whom God used to write a large portion of the New Testament, was one of the most highly educated scholars of all time.

He was intimately familiar with Greek and Roman history, culture and philosophy – as well as Jewish history and culture.

In his 1st letter to the church at Corinth in Greece, Paul wrote:

For the word of the cross is foolishness to those who are perishing, but to us who are being saved it is the power of God. (1 Corinthians 1:18)

Let no man deceive himself. If any man among you thinks that he is wise in this age, he must become foolish so that he may become wise. For the wisdom of this world is foolishness before God. For it is written, ‘He is the one who catches the wise in their craftiness;’ and again, ‘The Lord knows the reasonings of the wise, that they are useless.’ (1 Corinthians 3:18-20)

Instead of investigating the truth claims of Christianity, many simply assume that it’s false and label Christians as having a psychiatric disorder.

2 Comments on “The War on Truth: ‘The View’ Stuns Millions by Saying Christians Are Mentally Ill [Video]”