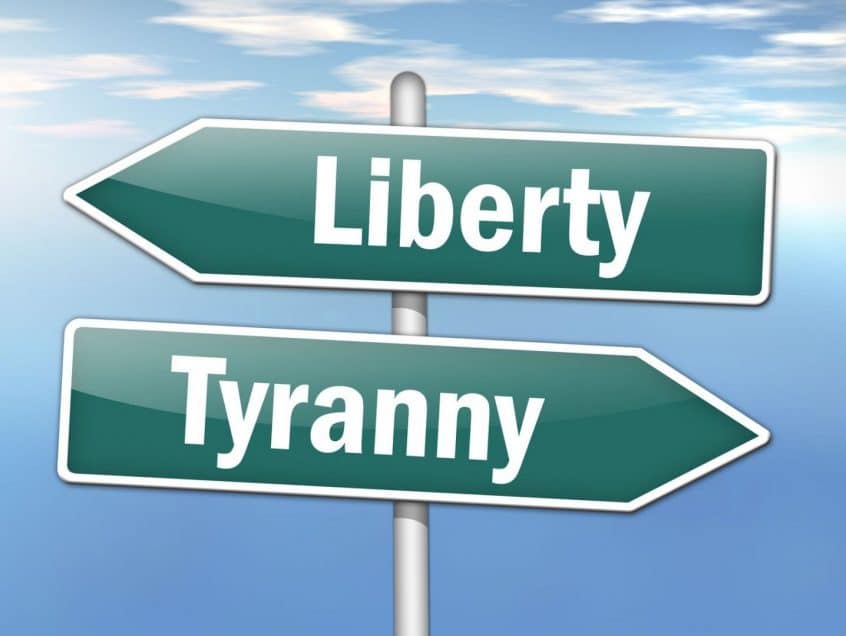 Across America, pastors, business owners, and citizens are being arrested, fined and intimidated by government overreach – by tyranny.

In some areas secular, pro-socialist, ideologically driven governors, county supervisors and cities have crossed the line from governing to tyranny.

And it’s getting worse:

The biased media ignores or distorts its coverage.

People fled to America 300 years ago so they could worship and live without government interference and intimidation.

That’s also what the American Revolution was all about.

That’s what the First Amendment of the Constitution is all about.

But in states like California, the constitution has been overlooked and ignored. For example, Governor Newsom allowed a pastor to be arrested simply because he objected to not being allowed to open up his church.

This Sunday hundreds of California churches will be reopening their doors without the state’s permission.

Attorney General William Barr sent a warning letter to Newsom to stop the discrimination against the churches.

Easter was canceled this year at churches … and few cared.

But now – after 3 months of economic shutdown and stay-at-home orders, protests have begun across America to end the quarantine and open up businesses and churches since it makes no sense to keep the lockdown going.

Pastors across America are defying the authorities who are denying them their First Amendment rights.

People across America want their freedoms back.

Politicians have no right or authority to close churches or make it illegal for Christians to worship together.

The First Amendment expressly prohibits government interference with religious freedom. This is the law of the land.

It’s foundational to our Republic.

The politicians abusing their authority and denying religious freedom are the ones violating the law, not the pastors and Christians.

My family – the French Huguenots — fled from religious oppression in France.

Freedom of religion is why they came to America…

But now freedom of religious expression has been converted from a natural right to a conditional privilege.

Power-hungry politicians have done this.

The media has created mass fear and panic in order to trash freedom.

The medical establishment and the so-called “experts” exaggerated and lied in order to increase their power and influence.

That should never happen under our Constitution.

Our freedoms have been trampled upon. Our rights have been ignored. Our Constitution has been made obsolete and irrelevant.

We’re told that to be safe we can’t be free.

Unlimited power to the mayor, the governor, the politicians … because it’s for our own good.

No worship. No school. No work.

Some politicians are keeping people in chains.

Patrick Henry said, “Is life so dear, or peace (and safety) so sweet, as to be purchased at the price of slavery?”

What will the politicians and the government leaders try to do next?

The answer is probably whatever we will let them get away with. It’s up to us.

Watch this disturbing video about the rise of tyranny in the U.S. (10 1/2 minutes).