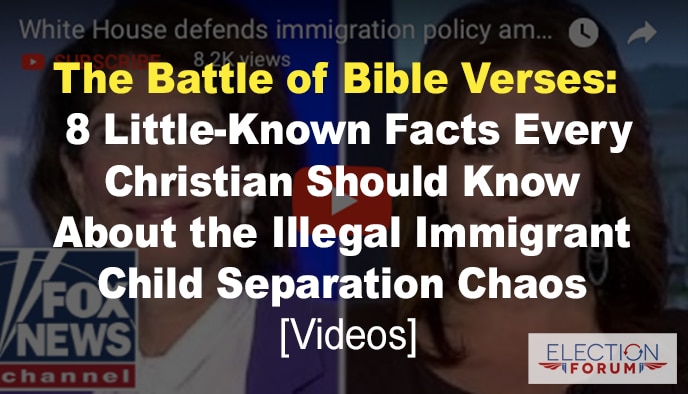 A Bible verse was heard around the world and back…

Romans 13 was quoted … debated … laughed at … mocked … and discussed by millions.

On social media, TV, and in newspapers, Romans 13 sparked a war of verses in which atheists, agnostics, progressive Christians … and evangelicals … used God’s word to argue a political issue.

Sadly, the words of God were not used to make rational arguments … but were used as proof texts for two different viewpoints.

I believe God’s word never returns void – “empty” – without accomplishing what He desires … without succeeding in the matter for which He sent it (Isaiah 55:11).

In their attempt to undermine Trump’s evangelical support, two verses were used by the progressives, the anti-Trumpers, the open-borders politicians and the media:

… and a few others relating to treatment of children.

There is truth in all of these verses that policy makers must consider….

But the progressive left thought these verses could undermine Trump’s evangelical base.

In response to the Bible verses used to attack Trump’s immigration policies, Jeff Sessions used Romans 13 to defend them…

He said, “I would cite you to the Apostle Paul and his clear and wise command in Romans 13 to obey the laws of the government because God has ordained them for the purpose of order.”

13 Let everyone be subject to the governing authorities, for there is no authority except that which God has established. The authorities that exist have been established by God. ²Consequently, whoever rebels against the authority is rebelling against what God has instituted, and those who do so will bring judgment on themselves. ³For rulers hold no terror for those who do right, but for those who do wrong. Do you want to be free from fear of the one in authority? Then do what is right and you will be commended.  4 For the one in authority is God’s servant for your good. But if you do wrong, be afraid, for rulers do not bear the sword for no reason. They are God’s servants, agents of wrath to bring punishment on the wrongdoer. 5Therefore, it is necessary to submit to the authorities, not only because of possible punishment but also as a matter of conscience.

Sessions is right that everyone should obey the laws instituted by governing authorities … and that government’s laws should be enforced.

Paul instructed Timothy, the young pastor of the church at Ephesus:

“First of all, then, I urge that entreaties and prayers, petitions and thanksgivings, be made on behalf of all men, for kings and all who are in authority…”
(1 Timothy 2:1-2)

And the Apostle Peter wrote to believers scattered throughout Asia Minor – modern day Turkey – to “Submit yourselves for the Lord’s sake to every human institution, whether to a king as the one in authority, or to governors as sent by him for the punishment of evildoers and the praise of those who do right. For such is the will of God that by doing right you may silence the ignorance of foolish men.” (1 Peter 2:13-15)

For example, in Acts 4, Peter and John were ordered by the Sanhedrin – Judaism’s Supreme Court – to stop preaching the gospel.

Their response was not a response of obedient compliance: “Whether it is right in the sight of God to give heed to you rather than to God, you be the judge; for we cannot stop speaking about what we have seen and heard.” (Acts 4:19-20)

Later, when Peter and some of the other apostles were arrested again for preaching the gospel and for healing sick people, the high priest said during his questioning, “We gave you strict orders not to continue teaching in this name [the name of Jesus], and yet you have filled Jerusalem with your teaching…”

Paul was beheaded in Rome’s prison … and Peter was crucified upside down.

Is this not contradictory? Were Peter and Paul not hypocrites?

Here’s how Dr. Martin Luther King – in Letter from Birmingham Jail – explains it:

Dr. King agreed with Saint Augustine, who wrote, “…an unjust law is no law at all.”

The point of this discussion – as it relates to the use of scripture by both Trump haters and Trump supporters – is this:

Never isolate and quote a single Bible passage to prove a point.

First, she attacked President Trump’s claim that the separation of illegal immigrant children from their parents at the U.S.-Mexico border is mandated by federal law passed by Democrats:

“This is not happening because of the ‘Democrats’ law,’ as the White House has claimed,” she said. “Separating families is not mandated by law at all. This is an outright lie.”

Next, Clinton attacked Jeff Sessions’ use of scripture:

“Nor are these policies rooted in religion. In fact, those who selectively use the Bible to justify this cruelty are ignoring a central tenet of Christianity…I’ve studied the Bible, both the Old and the New Testament, and what is being done using the name of religion is contrary to everything I was ever taught. Jesus said, ‘Suffer the little children unto me.’ He did not say, ‘Let the children suffer.’”

She selected a single Bible verse – which she misquoted by the way – to try to prove her own point … while disproving Sessions’ point.

If protecting and encouraging and blessing little children is “a central tenet of Christianity” in Ms. Clinton’s mind, she has some explaining to do regarding her support of partial-birth abortion … which inflicts unspeakable suffering and death upon little children.

It happens to U.S. citizens all the time … and it has happened with illegal immigrants during previous administrations.

The only thing that’s new with the Trump administration is the “zero tolerance” policy announced in April by Attorney General Jeff Sessions … meaning that ALL adults crossing the border illegally would be subject to prosecution.

The policy makes no exceptions for adults who seek entry into the U.S. accompanied by minors…

Due to federal court rulings in 1997 and in 2016, children cannot be held with adults in jail, so the children are sent to separate detention facilities.

More than 2,300 children have been separated from their accompanying adults in this fashion since the zero-tolerance policy was announced…

But several other important facts haven’t been reported by most of the media:

Franklin Graham called the separation of children from their parents “disgraceful” and “terrible.”

Ralph Reed of the Faith and Freedom Coalition wrote that the separations were “heartbreaking and tragic,” and “part of the larger tragedy of a broken immigration system that does not reflect our values or our faith.”

Groups like the Southern Baptist Convention, National Association of Evangelicals and the Council for Christian Colleges and Universities all condemned the policy … based on the fact: “God has established the family as the fundamental building block of society.”

Jim Daly of Focus on the Family said in a blog post:

“Like many of you, I’ve been…straining to gather reliable information and, at times, struggling to separate the fact from the fiction. As I’ve previously indicated, separating children from their parents can be harmful and traumatic… [S]eeing images of innocent, crying boys and girls in custody is enough to rip your heart out. The current crisis is a tragedy, pure and simple.”

He also attributed the current crisis at the border to long-standing issues of “bad policy, unenforced laws and an inability of politicians to make difficult and often unpopular decisions. It’s also the result of tyrannical and unpopular governments – and the attractive bright light of America that has historically drawn people to her shores.”

In response to the evangelical uproar over family separation, President Trump issued an Executive Order on June 20th…

The order states that it is “the policy of this Administration to maintain family unity, including by detaining alien families together where appropriate and consistent with law and available resources.”

As Christians, we are committed to protecting the innocent, advocating family unity and promoting family values.

The progressive groups and candidates are using the issue of “the children” to:

For example, hundreds of progressive groups – including Obama’s Organizing for Action – are sending out fundraising letters.

An effort by two Silicon Valley leaders has created a Facebook campaign to provide each immigrant parent in custody with $1,500 to post bond.

Sessions was right about Romans 13 … and he was wrong…

The Apostle Paul wrote the letter to the Romans while he was in Corinth … and while the Christians in Rome were beginning to suffer persecution under Emperor Nero.

Nero was a brutal dictator …

There was no justice … no mercy … no voice for the common people.

Nero was a tyrant who persecuted Christians … and just a few short years after Paul wrote, began sentencing them to torture and death.

Paul wasn’t teaching or advocating blind obedience to a government…

He was in fact imprisoned numerous times for disobeying governing authorities.

A Christian should be obedient and law-abiding … except when a government law violates Biblical law or a Biblically-based personal conviction.

We are to submit to government up to the point in which obedience to the state becomes disobedience to God … or our Biblically-based conscience.

Peter encouraged us to show proper respect to everyone…

This means to “Honor all people, love the brotherhood [the family of believers], fear God, honor the king.” (1 Peter 2:17)

We are to love each other and honor our secular leaders … but we are to fear only God.

President Trump has only two choices regarding illegal immigration:

Here are some suggested prayer requests:

Neglecting or mistreating children is a grave offense to God. Jesus said, “It is not the will of My Father who is in heaven that one of these little ones should perish.” (Matthew 18:14)

He also said, “…but whoever causes one of these little ones who believe in Me to stumble, it would be better for him to have a heavy millstone hung around his neck, and to be drowned in the depth of the sea.” (Matthew 18:6)

Here are two CNN interviews of border patrol agents. The first is regarding the treatment of children in detention facilities (10 ½ minutes):

What do you think? Write me at craig@craighuey.com