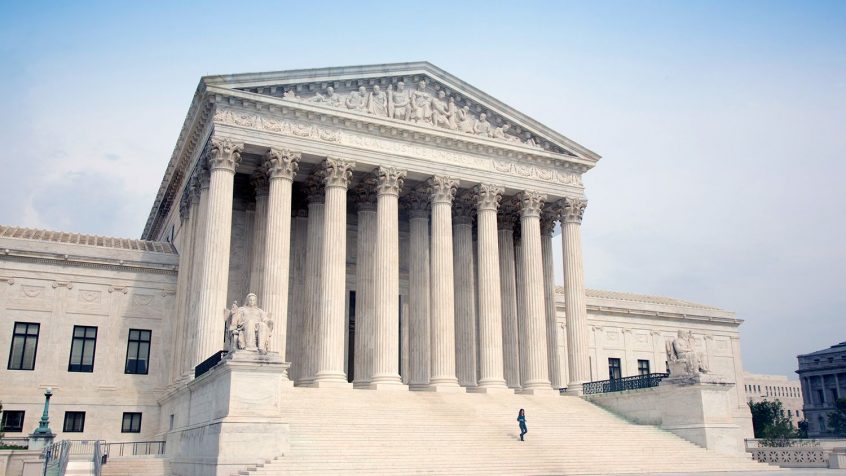 The Supreme Court is striking down the courts Roe vs. Wade abortion decision saying there is no constitutional right to abortion.

We were not supposed to know the decision until late June or July. But it was illegally leaked to the public.

The effect will be to leave it up to the states to decide – or Congress.

It does not ban abortions. It leaves it up to the people, not nine judges to decide.

“’We hold that Roe and Casey must be overruled.’ There is no explicit or implicit right to abortion in the Constitution. Abortion is not within the category of rights that have been held to be guaranteed in their substance by the Due Process Clause. Far from being deeply rooted in the nation’s history and implicit in the concept of ordered liberty, it was a crime at all stages of pregnancy in three-quarters of the states when the 14th Amendment was adopted.

“It is also ‘fundamentally different’ from ‘the rights recognized in past decisions involving matters such as intimate sexual relations, contraception, and marriage,’ as it destroys what Roe and Casey called ‘fetal life’ and what the Mississippi law describes as an ‘unborn human being.’”

“Stare decisis (a legal doctrine meaning ‘to stand by things decided’) ‘does not compel unending adherence to Roe’s abuse of judicial authority.’ Roe was ‘egregiously wrong from the start,’ its reasoning was ‘exceptionally weak,’ and it has had ‘damaging consequences.’”

Put another way, the Court is saying that the U.S. Constitution requires that the abortion issue must be decided by the people of the United States through their elected representatives in the legislatures of the states.

Contrary to the deliberate lies being told by those who oppose any changes to Roe v. Wade, the draft opinion simply and specifically gives to the people the power to decide what laws should govern abortion in each of the states.

In states like California, New York, Illinois, and Massachusetts, for example, legal access to abortion is likely to remain completely unchanged.

But in other states that favor changes in the laws governing legal access to abortion, voters will once again have the power to make changes in abortion laws through their elected representatives.

Rather than the Court’s majority destroying democracy by their ruling on the abortion issue – as the pro-abortion hysterical zealots and media scolds claim and lie about – the ruling will actually return the power to make decisions about the abortion issue back to all the people in each state.

Put simply, it upholds the fact that we are a Democratic Republic. It also means that we return to the words of the Constitution, wherein we the people will determine what laws and policies we favor or oppose, enact or reject – not nine unelected lawyers dressed in black robes telling us what to think about abortion.

Fact #2. The original ruling was flawed, an act of judicial activism legislating from the bench.

The current Supreme Court majority seems poised to overturn that unconstitutional judicial activism – known as “legislating from the Bench.”

They state correctly, as the leaked draft opinion puts it: “There is no explicit or implicit right to abortion in the Constitution.”

Their draft opinion is what is known as a “strict constructionist” or “textualist” interpretation of the U.S. Constitution and the laws. It means interpreting and abiding by the words in the Constitution, its Bill of Rights as written by the Founders and approved by We the People – and its Amendments as they have been lawfully adopted since our country’s founding.

Fact #3. The pro-abortion secularists and socialists went crazy – (or to be precise, “crazier”)

“If the Court does overturn Roe, it will fall on our nation’s elected officials at all levels of government to protect woman’s right to choose. And it will fall on voters to elect pro-choice officials this November. At the federal level, we will need more pro-choice Senators and a pro-choice majority in the House to adopt legislation that codifies Roe, which I will work to pass and sign into law.”

Fact #5. Why was the document leaked?

The document was illegally leaked in a brazen attempt to intimidate and personally threaten our Supreme Court Justices, attack our judicial branch and system of government, and corruptly influence and alter the Court’s final decisions and majority opinion in the current case, Dobbs v. Jackson Women’s Health Organizations.

What was leaked was a draft. The judges could still change their minds. The final draft was not to be settled until late June or July.

According to Politico, which first publicized the document leaked to it online:

“Under long-standing court procedures, justices hold preliminary votes on cases shortly after argument and assign a member of the majority to write a draft of the court’s opinion. The draft is often amended in consultation with other justices, and in some cases the justices change their votes altogether, creating the possibility that the current alignment on Dobbs v. Jackson Women’s Health Organization could change.”

So, what actions should we expect from the most fanatical pro-abortion forces in the weeks ahead?

Marches and protests and violent riots.

The fear that Democrats and other radicals will try to “pack the court” with new Justices is a reasonable concern – and it is unsettling to some Supreme Court Justices.

Fact #6. The Leaker – how the Deep State protects its own.

The leak was historic. In more than 200 years – no such damaging court leak has occurred.

The person(s) responsible could face multiple federal felony charges and significant prison time.  And if she or he is a lawyer who works at the Court, disbarment for life is certain – meaning the leaker will never be allowed to practice law again … for life.

But they don’t care.

They consider themselves “the Resistance” – or Deep State bureaucrats driven by ideology and an insatiable appetite for personal power and political control above all else.

Under Trump, multiple Deep State leaks were ignored and not punished … the Deep State protects its own.

When (not if) the person who leaked the document is caught, he or she will likely be hailed as a “hero” by the most unhinged, pro-abortion, radical-Left Democrats, Marxists, anarchists and their closest and most militant allies – Antifa, BLM, the National Abortion Rights Action League, NOW, and the abortion industry’s champion exterminator of unborn babies, Planned Parenthood.

Since the Roe v. Wade decision, in 1973, more than 50 million defenseless, unborn babies have been killed in the United States – a death toll exceeded only by China’s mass-murdering Communist Dictator Mao Zedong.

Now it’s up to all of us to make sure that U.S. Senators and Members of Congress are pro-life – and that they act decisively, courageously, relentlessly to end the evil killing of the unborn.

And that Governors and state legislatures are pro-life in this upcoming midterm election.

Your help is needed more than ever before to protect the unborn – and to find loving Christian homes and parents where children in need of adoption can be loved, cared for, nurtured and become a treasured family member for life.

We need to promote a society that is encouraging, embracing, and taking strong, generous, and sustained actions to support responsible, safe adoption in America.

Pray that the judges do not cave to the pressure and change their ruling. Pray that more people will recognize that life begins at conception…that you and every child are created by God (Psalm 139).

13 For You formed my inward parts;
You covered me in my mother’s womb.
14 I will praise You, for I am fearfully and wonderfully made;
Marvelous are Your works,
And that my soul knows very well.
15 My frame was not hidden from You,
When I was made in secret,
And skillfully wrought in the lowest parts of the earth.
16 Your eyes saw my substance, being yet unformed.
And in Your book they all were written,
The days fashioned for me,
When as yet there were none of them.

17 How precious also are Your thoughts to me, O God!
How great is the sum of them!
18 If I should count them, they would be more in number than the sand;
When I awake, I am still with You. (NKJV)