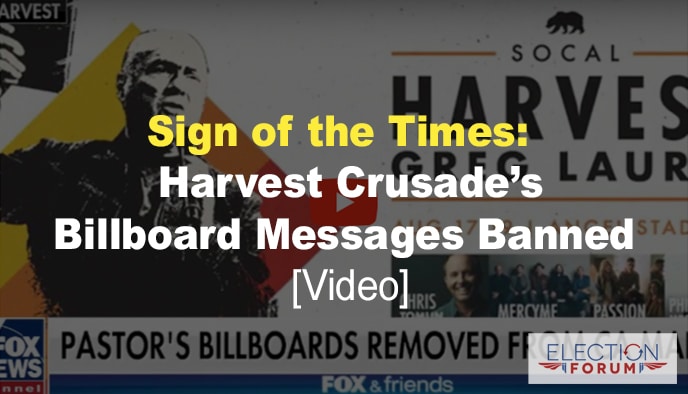 Some people hate God so much, they can’t stand to see even a black-and-white image of a book that looks like a Bible…

And they don’t want anyone else to see such an “offensive” image either.

So they complain … throw tantrums … and make threats to silence the “offenders.”

Every year for the past 29 years, evangelist Greg Laurie has held a weekend Harvest Crusade at Angel Stadium in Anaheim, California.

Shelly and I have been to almost every one of them…

When I was a youth pastor and an adult singles pastor, we would organize large groups to attend.

It draws tens of thousands of people for 3 consecutive nights…

And every year thousands receive Christ as their personal Lord and Savior.

To advertise this year’s event, Laurie contracted with the real estate company that owns a prestigious outdoor mall not far from Angel Stadium.

The company agreed to post large billboards at the mall promoting the crusade.

The billboards – in black-and-white – depict Greg Laurie holding in one hand a microphone below his face … and in the other hand, a black book high in the air.

The black book represents a Bible – although it doesn’t have a cross, other religious symbols … or the word “Bible” on it.

The image was apparently too offensive to some … and they complained to the company that owns the mall.

Due to a “serious threat” received by the company – which it did not describe publicly – it caved in to the demands of the “multiple complaints,” removing all of Harvest Crusade’s advertising … and refunding their money.

It’s sad that just a few who hate the Bible and hate God are able to prevent many from hearing about God and the salvation He offers in His word.

I’m reminded of a passage in the Gospel of John that follows just a few verses after the well-known John 3:16…

“For everyone who does evil hates the Light, and does not come to the Light for fear that his deeds will be exposed.” (John 3:20)

If you live in southern California, I hope you’ll attend.

Watch Greg Laurie describing the billboard incident with one of the Fox and Friends morning hosts (4 minutes):