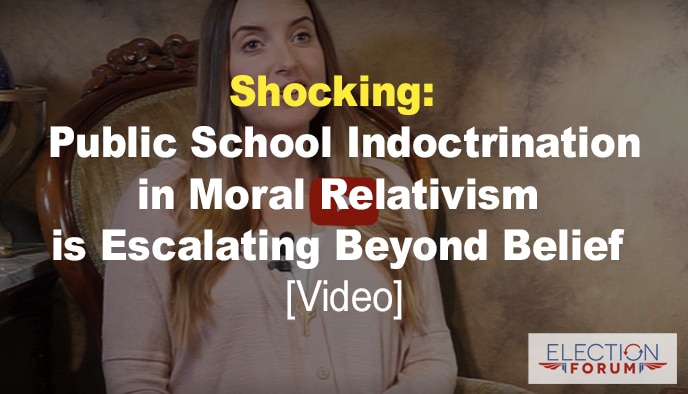 Public schools are indoctrinating students in moral relativism … and are refusing to show parents how they’re doing it!

Examples abound … but in this short article, I’ll give you just two that will blow your mind…

A kindergarten teacher at Rocklin Academy – a charter school in Sacramento, California – read the book I am Jazz to her class the day before the school year ended for summer recess.

The illustrated book was co-written by a teenaged transgender activist … and is targeted for children between 4 and 8 years of age.

After the book was read, one of the boys in the class went to the bathroom – which was in the classroom – put on a dress and came out…

The teacher announced to the class that the boy was now a girl … and that “she” had a new girl name.

Parents weren’t notified ahead of time of what the teacher was going to do … so they had no opportunity to opt out.

California state law mandates that schools notify parents and allow them to opt-out their children whenever teaching sex education or HIV prevention education – but not when teaching transgenderism.

It was a weeklong blitz of videos promoting the LGBT lifestyle … which was required viewing for 2,800 students at Emmaus High School in the East Penn School District in Pennsylvania.

Attorneys hired by a group of parents to sue the school district wrote this in a letter to the district superintendent:

“The Pennsylvania Administrative Code requires that the district provide parents the opportunity to review all instructional material shown to their children, prior to it being shown…. The district has violated this requirement.”

So how did the school district superintendent respond?

He claimed the videos weren’t curriculum…

Because they were shown to the students during homeroom … which is not one of the instructional periods of the school day.

“This was not curriculum,” he insisted. This was student work that needs to be protected from public scrutiny.”

In reality, the so-called “student work” was actually produced by the Gay Lesbian Straight Education Alliance (GLSEN) … which has been secretly infiltrating public schools for years.

But now, public schools are arrogantly redefining what constitutes “curriculum” … and are openly joining LGBT activists in their campaign of secrecy.