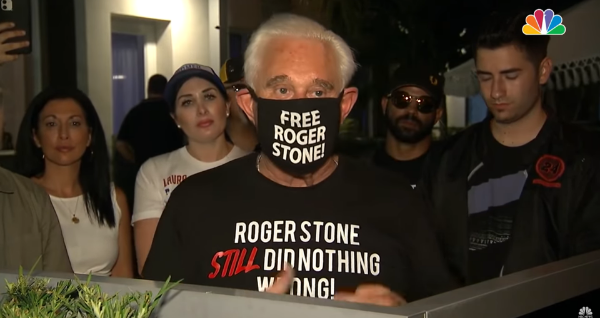 Roger Stone is a victim of the deep state.

He was caught up in the abuses of power of the FBI, the DOJ, the Mueller investigation and a judge in their corrupt efforts to destroy President Donald Trump.

Personally, I do not like Roger Stone. Never have. He has been called the “bad boy” of politics. I have never trusted him.

However, he did not deserve the political persecution that the Mueller investigation and the FBI inflicted. It was not for any legal reason other than to destroy President Donald Trump.

It was an attack to:

· Undermine his ability to lead

· Keep the Russian collusion narrative in the media

· Bury the probability that the DNC and Clinton email leaks were not caused by Russian hacking, but were an internal leak.

God used this incident in Stone’s life to bring him to his knees and to cry out to God.

Devastated and desperate, Stone was going to jail. He might have died in jail. He was economically and emotionally destroyed.

Stone says, “I stood up with 500 other people. I wasn’t the slightest bit embarrassed. I confessed that I was a sinner. I repeated a pledge that he recited, and it was as if a cement block was lifted off of my chest. I can’t even explain it.”

Stone went on to say after accepting Christ as his personal savior (while on trial), “I was never scared. I was never worried. I was completely confident that the Lord would guide the president to do the right thing.”

“The Lord will deal with them, so it’s not like they will go unpunished. That makes it easier to pray for them for when that moment comes.”

If you want to know how the FBI and the Mueller investigation – part of the deep state – used the coercive power of the government to abuse their powers, be sure to read my book, The Deep State: 15 Surprising Dangers You Should Know.

It is available on Amazon, here.

A kindle version is available here.

Or, if you prefer a signed copy, please order directly from here.