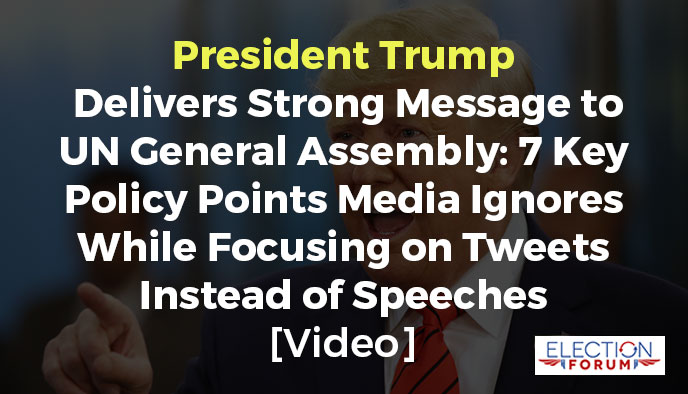 He made 7 key policy statements that the progressive media totally ignored.

The progressive media has one agenda – portray President Trump as a crazed, irresponsible narcissist who uses words “to beat people down instead of lift people up.”

They would rather spend their time analyzing every word and possible thought motivation behind his tweets than report on a major policy speech delivered to the UN General Assembly.

Because substantive presidential speeches don’t fit the narrative the media has created for this president.

Here’s a summary of the 7 main policy positions President Trump shared face to face with the world’s leaders at the UN:

1. The U.S. will oppose the UN Arms Treaty as an assault on our Second Amendment rights.

He will not support any UN-sanctioned international gun control resolution or law that restricts firearm ownership by U.S. citizens.

2. The U.S. will reject globalism under the Trump administration.

He made it very clear when he said, “The future does not belong to globalists. The future belongs to patriots.”

He also said, “As long as I am President of the United States, we will enforce our laws and protect our borders.”

He accused China of “gaming the system” by continuing to insist that it’s a “developing country” when in fact it’s the second largest economy on the planet.

And he said the theory that trade would liberalize China has been “proven completely wrong.

4. President Trump vowed to protect Hong Kong from being taken over by socialist China.

He called out the communist regime in Beijing in front of the Chinese delegation, who were sitting in the room.

He said if China wants to be taken seriously, it must honor the pledges it made with respect to the rights of Hong Kong’s residents.

He told the cold, hard truth about Iran’s aggression … and its support of terrorism in the Middle East and elsewhere.

Our president pulled no punches. He named Iran as “one of the greatest security threats to peace-loving nations.”

And he vowed to tighten sanctions against Iran until it discontinues its aggressive and belligerent activities.

He called for freedom in Venezuela…

He called out Cuba for its oppression of its citizens.

7. He defended God-given rights and freedoms.

What do you think? Email me at [email protected]