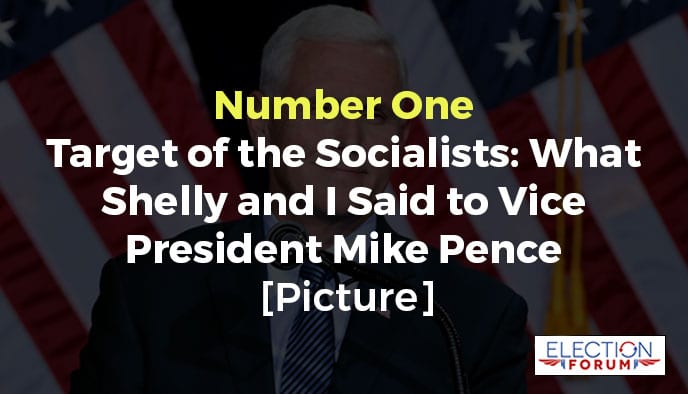 Recently Shelly and I had the honor of meeting with Vice President Mike Pence.

During our brief meeting, I reminded Vice President Pence about our meeting 4 years ago in Newport Beach … where I told him I was a Christian first, a father and husband next, and a Republican third – in that order.

I repeated that statement … and to my surprise, he remembered our previous meeting.

Mike Pence is famous for introducing himself by saying, “I’m a Christian, a Conservative, and a Republican, in that order.”

This time I told him, “We are praying for you.”

He responded, “So blessed you’re praying, because Donald Trump and I feel it and appreciate it.”

But it’s what Shelly said that was the most powerful … and had impact.

She looked at the Vice President and said, “Stand bold, strong and courageous.”

He smiled, and later that evening decided to use that concept in his talk to the audience…

Mike Pence gets more criticism for his faith – and for who he is and what he does – than even President Trump. He is the number one target of the socialists.

“Be on the alert, stand firm in the faith, act like men, be strong. Let all that you do be done in love.”

One Comment on “Number One Target of the Socialists: What Shelly and I Said to Vice President Mike Pence [Picture]”