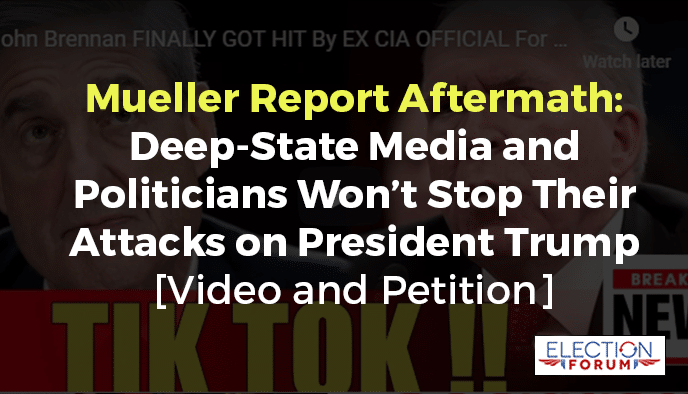 The Deep State – meaning all those who favor huge regulatory bureaucracies and socialistic (that is, government-controlled) industries – loathes Donald J. Trump.

Because they are “The Swamp” he promised to “drain” when he was running for president in 2016.

President Trump is a threat to their power and control over you and every other American.

Why wouldn’t they want to see him removed from office by any means possible?

The main takeaways from the Mueller Report:

NOTE: If you haven’t yet read my special report on the shocking facts about the Mueller investigation, click here.

You’d think the pro-socialist politicians would drop the collusion narrative and move on. But no…

Here’s what some of them were saying at the beginning of – and during – the Mueller investigation:

“The bombshell revelation that U.S. officials have information that suggests Trump associates may have colluded with the Russians means we must pause the entire Trump agenda. We may have an illegitimate President of the United States.”
~ Re. Ted Lieu (D-CA), March 23, 2017

“Here you have a President who, I can tell you and guarantee you, is in collusion with the Russians to undermine our democracy.”
~ Rep. Maxine Waters (D-CA), September 21, 2017

Rep. Schiff was quite a workhorse in spreading the collusion narrative in the media. A tracking report revealed that during the first 6 months of Trump’s presidency, Schiff was interviewed 123 times on national TV … consuming more than 14 hours of air time.

Here’s what Schiff and others are saying now:

“There was a big difference between whether there was evidence of collusion – and I think that evidence is in plain sight – and whether you can establish proof beyond a reasonable doubt of a criminal conspiracy.”
~ Rep. Adam Schiff, March 25, 2019

“Given the lengthy redactions in many of the pleadings of the special counsel eluding to other investigations, I think it’s entirely possible if not likely that there will be other indictments.”
~ Rep. Adam Schiff, March 22, 2019

“We don’t know much. I’m just going to go by what we do know, and I must say, I don’t think it looks good. No further indictments. … Did the Democrats put too much trust in the Mueller report? Because I don’t need the Mueller report to know he’s a traitor. I have a TV.”
~ HBO host Bill Maher, March 22, 2019

“You have a President who, in my opinion, beyond a shadow of a doubt, sought to, however hamhandedly, collude with the Russian government or foreign power to undermine and influence our elections.”
~ Rep. Beto O’Rourke (D-TX), March 23, 2019

In fairness, not all progressive-media Trump critics got it wrong with respect to the Mueller investigation of collusion between the Trump campaign and Russia…

In June 2017, CNN host Van Jones was approached in the street by a man Jones didn’t realize was secretly working for Project Veritas … and was taping their conversation…

The man asked Jones what he thought of the Russia collusion investigation. Jones replied, “The Russia thing is just a big nothing burger. There’s nothing there you can do.”

So what happens next?

Larry Elder – conservative radio talk-show host and author – writes, “Now that the [Mueller] report found no collusion, we can expect the Democrats and much of the media to get back to basics: calling the President racist, fascist, sexist, xenophobic, anti-Semitic, homophobic, anti-Hispanic, etc.”

You can learn much more about the Deep State “swamp” in my book, The Deep State: 15 Surprising Dangers You Should Know.

The Deep State is where the collusion really is – between the socialist activists in all 3 branches of the federal government … who want to throw freedom-loving American conservatives and libertarians under the bus … and destroy our First-Amendment freedoms in the process.

You can order my book at a 20% discount here. There are links on this page to Amazon if you prefer ordering the Kindle version.

Watch this video compilation about the aftermath of the Russia collusion hoax (11 ½ minutes).

Also … if you haven’t already done so … please sign our petition to stop the abuse of the FISA surveillance program by protecting Americans from government spying.