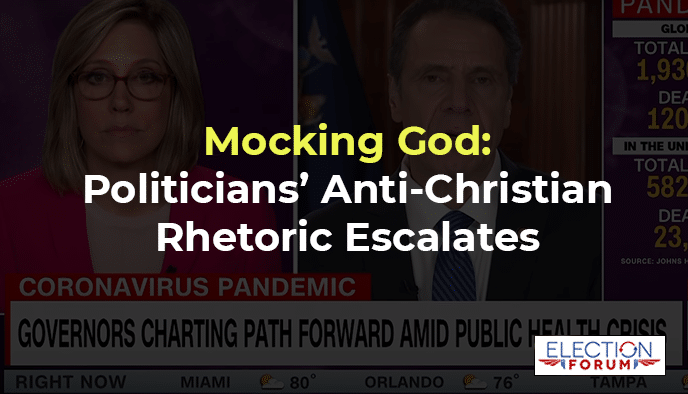 Across America, city mayors, county officials, governors of states, members of Congress have been attacking Christians and Christianity.

The China Coronavirus pandemic has created an atmosphere of fear and opened the door for oppression for people of faith.

The latest has been New York’s Governor Andrew Cuomo.

Governor Cuomo said something that really spoke of his heart.

He said the progress being made in New York against the coronavirus had nothing to do with God.

This added to Governor Cuomo getting nationwide attention.  It is not unusual for him; he once said pro-life Americans were not welcome in his state.

But this is completely contrary to what the Founding Fathers proclaimed. They said a recognition of prayer was critical and that God was active in the affairs of men.

Throughout the history of the United States, people were in prayer expecting the true and living God to act.

And, today they have been.

The people are asking God to help people with the sickness and to stop the pandemic.

Ronald Regain said, “if we ever forget that we were once under God, then we will be a nation under.”

Politicians like Gov. Cuomo would undermine our religious freedoms and our ability to operate as a nation.