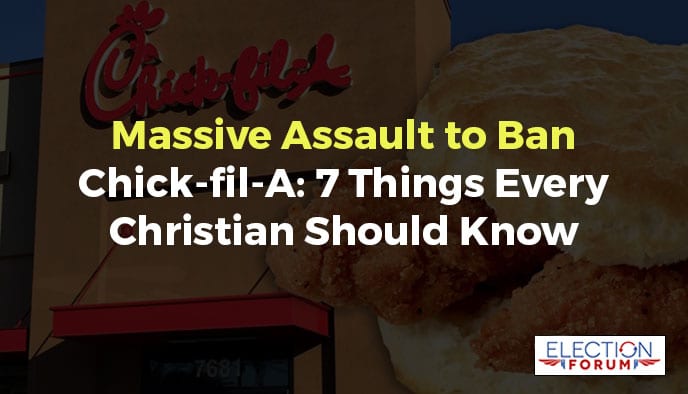 Across America, Chick-fil-A is under attack…

Schools, airports and cities are trying to ban the chicken restaurant.

Because its owners, who are Christians, make private donations to pro-life, pro-traditional marriage organizations.

The cities of San Antonio, Texas and Buffalo, New York have told Chick-fil-A that they can’t open restaurants in their cities’ airports…

In California, Democrat Party officials called for a boycott. On college campuses and in cities, Chick-fil-A is being banned.

The reason? Because the owners of Chick-fil-A support biblical marriage.

San Antonio City Councilman Robert Trevino said, “San Antonio is a city full of compassion, and we do not have room in our public facilities for a business with a legacy of anti-LGBTQ behavior.”

There’s only one problem with Trevino’s statement: It’s a lie.

Chick-fil-A does not engage in anti-LGBTQ behavior. There hasn’t been a single instance in the 62-year history of the company of an LGBTQ customer or employee alleging discrimination by the restaurant – or by an employee of the restaurant.

What are the objections? Chick-fil-A’s owners made donations to the Salvation Army, the Fellowship of Christian Athletes, and a local youth home in Vidalia, Georgia.

This is the new definition of how “tolerance” is demonstrated by progressive politicians and by LGBTQ activists.

In violation of a company’s constitutionally protected right to support individuals, Chick-fil-A is being punished for supporting Christian organizations – something which has nothing to do with how the company conducts its business.

The real reason Chick-fil-A is under attack is because the owners of the company are Christians … and the political socialists in the LGBT community are at war with Christianity.

The superficial reason for the bans against Chick-fil-A is a ThinkProgress report that criticized the owners of the restaurant for their private donations to the Salvation Army, the Fellowship of Christian Athletes and the Paul Anderson Youth Home.

All of these groups do great work with love and compassion for all.

The restaurant has never refused to hire anyone, nor has anyone ever accused it of discriminating against gays or the LGBT community in general.

When they choose a target, they go all out:

They use petitions. They activate the signers to call and send emails. It’s overwhelming to a City Council or official.

As Christians, we don’t have to stand on the sidelines and watch a company being smeared and falsely accused like this. Here are some things you can do:

We now live in a society in which business owners are facing discrimination for their personal commitment to biblical morality, even when their customers have made no allegations against them.

Here are just 3 other examples of how Christianity is being marginalized … and how Christians are being silenced:

Those who want to ban Chick-fil-A are intolerant and religious bigots. In a free society, you tolerate and respect those you disagree with … while using logical arguments to show the errors of their ideas and the superiority of your own ideas.

You don’t dismiss those you disagree with discriminating against them to silence them.

5 Comments on “Massive Assault to Ban Chick-fil-A: 7 Things Every Christian Should Know”