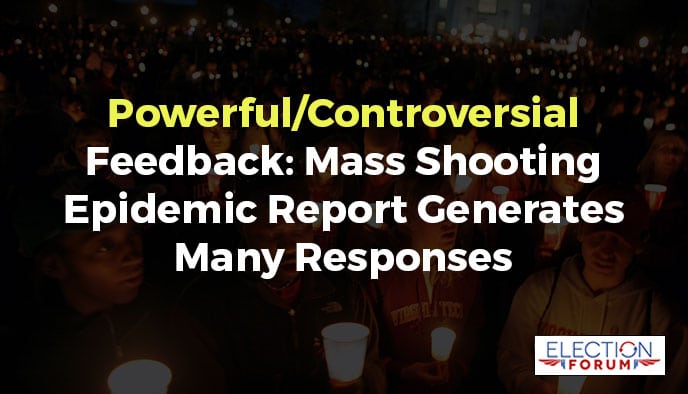 Many thanks to all of you who took the time to write me emails in response to my special report last week, “Mass Shooting Epidemic: None Dare Call it Evil in the Heart: 12 Realities the Media Won’t Talk About.”

Please note that after this article was published, the death toll from the El Paso/Dayton shootings was updated to 31.

I published an updated version of the report later in the week with two additional “realities” added to the list. Click here to read it.

Here are just a few of the responses I received:

“Thank you brother for your very thoughtful & thought-provoking article.  I will be spreading it further & hopefully it will bring more sanity into the dialogue!”

“Great article on the mass shootings!  You were very thorough and covered a lot of ground.  I like the fact that you point out that mass shootings are caused by evil, and Satan, himself.  No one else pointed that out!”

“Craig, thank you for the detailed background information on the mass shootings.  I am disappointed that the news reporters only report the dramatic graphic details of the mass murders rather than the motivations of the murderers. I agree with you that the main problem is spiritual–a matter of the heart!”

“Great article Craig, and the data you cited to back up your statements was powerful. As a retired public school teacher and administrator I found your statement about the failings of the public school system rang true. Parents need to be able to choose a school that affirms God and the moral teachings of scripture with their share of tax funds following their child to that school. Providing a “free” Christian education, even only to those who wanted it, would be transformational for our country and culture. I believe that the church needs to reclaim the role of educating our kids and come up with creative locally appropriate methods to school our kids together or by supporting home schooling options.”

“In this your “magnum opus”, you detailed accurately from A to Z the issue of gun control, mass killings, and the politics of the Progressive Left and the media that is driving it. Bravo!”

I also received negative responses. Here’s one that contained a popular argument about Australia that gun control advocates like to use:

“I am a communications PhD and a Biblical Christian.  Sorry, but your arguments against gun control are full of holes.  You and gun supporters say the same things over and over and they are misleading and do not stand up to rational argument.

You mentioned that Obama pointed out our gun deaths are all out of proportion to other developed countries and then said he had no proof.  Let me give you some.  In America we have about 15,000 gun deaths a year.  England has several hundred (sic).  Australia (sic) had one mass shooting in the 90’s and immediately basically banned all guns except pistols and hunting rifles.  They have had NO mass shootings since.  You can talk all you want about guns are not the problem, but they are.

The research is all on the side of gun restrictions.  Sorry, you have no argument.”

There are several problems with this argument … not the least of which is that there are large cultural differences between Australia and the U.S. that are not taken into consideration.

It’s a classic example of “comparing apples and oranges.”

I will address this argument in detail in an upcoming Reality Alert article. Watch for it.