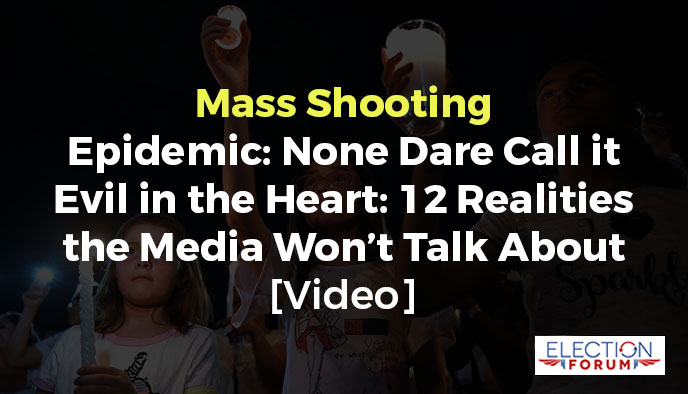 Our hearts break for the 29 people killed and the many injured in the recent mass shootings in El Paso, Texas and in Dayton, Ohio.

Also for the victims of the shootings in Gilroy, California and in Chicago, Illinois.

We grieve for the families of the victims … and for the injured survivors – whose lives will be forever scarred by their traumatic experiences.

Here are 12 realities no one is willing to talk about … but that you should be aware of:

American culture and society have changed for the worse – morally speaking – over the past generation. We live in an extremely dangerous society today. No one is entirely safe – not even in their own homes.

There are no longer any culturally-agreed-upon standards of absolute right and wrong in our country. Until this changes, mass murders will continue

In the face of mass murder, people often react irrationally. They want to do something – anything – to stop the violence and “solve” the problem … even if it’s the wrong “solution” … even if it involves taking away the freedoms and rights of law-abiding citizens.

Before the bodies were even identified in El Paso and Dayton, the politicians and slanted media were attacking President Trump and blaming him for the attacks.

Beto O’Rourke accused the president of inciting violence: “He is a racist, and he stokes racism in this country.”

Rep. Maxine Waters (D-CA) tweeted that President Trump “cannot escape accepting blame for these escalating killings in our country that are motivated by your race baiting!”

Progressive Democrats of America sent out an email to its list blaming the president for “white supremacist violence,” claiming, “Yes, you Mr. President had your finger on that AK-47.”

The media made a big deal about the El Paso shooter’s disdain for Hispanic immigrants, but ignored his animus toward both political parties and toward corporate America … especially farming and drilling.

And they ignored the Dayton shooter’s socialism, his support for Antifa and for Elizabeth Warren … and the fact that he was a Satanist.

You have to understand that the mainstream media cherry-picks what it reports about mass shooters because they have a political agenda to support.

Gun control advocates always use mass shootings as a springboard to call for greater restrictions on gun ownership.

If this were really the answer, then Chicago – with the strictest gun laws in the nation – would be virtually free of gun violence. But clearly, this isn’t the case.

After the El Paso and Dayton mass shootings, former President Obama said America’s level of gun violence is far out of proportion to other developed countries and that excuses about the difficulty of stopping such crimes will no longer cut it.

He wrote, “Every time this happens, we’re told that tougher gun laws won’t stop all murders; that they won’t stop every deranged individual from getting a weapon and shooting innocent people in public places. But the evidence shows that they can stop some killings.”

Of course, he didn’t cite any evidence … and he didn’t mention the shooting epidemics in Chicago, Baltimore and other cities.

Perhaps he should take a look at what our kids are taught in our public schools and colleges about the value of human life … and compare that with what is taught in other developed countries.

Socialist politicians, the progressive media and social media bloggers are always quick to assess blame and responsibility for mass shootings…

But they never hold the shooters responsible for their heinous acts.

Former President Obama blamed weak gun laws and “leaders who demonize those who don’t look like us, or suggest that other people, including immigrants, threaten our way of life.”

Others blamed “racist language” and “white supremacy” for the actions of the El Paso and Dayton shooters.

Why do these politicians and pundits not blame the shooters for their murderous acts?

Because to do so would require admitting that some people have become overpowered by hatred and evil in their hearts … and that it has nothing to do with politics.

No one ever talks about this.

Jeremiah 17:9 reminds us, “The heart is more deceitful than all else and is desperately wicked; who can understand it?”

And in Jeremiah 17:5 we are told, “Thus says the Lord, ‘Cursed is the man who trusts in mankind and makes flesh his strength, and whose heart turns away from the Lord.”

White supremacy is the belief that white people are superior to people of other races and should therefore dominate and rule over all other races.

It is evil and immoral.

Of the 4 mass shootings covered in this report, 2 possibly could be linked to white supremacy beliefs:

The other shootings demonstrably had nothing whatsoever to do with white supremacy.

When any tragedy occurs, Christians typically respond by saying they are praying for the survivors … and for the families of the victims.

The anti-Christian media, politicians and Hollywood always ridicule such offers of prayer…

After a horrific shooting at a Texas church during a Sunday service in 2017, one critic said, “If prayers were the answer to gun violence, wouldn’t people at a church service be safe? Please make gun laws.”

Another quipped, “The murdered victims were in a church. If prayers did anything, they’d still be alive.”

After the El Paso shooting, an atheist blogger wrote, “Saying meaningless words to an imaginary being won’t fix our gun problems.”

In the wake of unspeakable evil and tragedy, many people turn to God for comfort … and for answers.

The Amplified version of Psalm 46 begins with the words, “God is our refuge and strength, a very present and well-proved help in trouble. Therefore we will not fear, though the earth should change and though the mountains be shaken into the midst of the seas…”

The gospel is also proclaimed in new ways and with great effectiveness to many who have never bothered to listen to the message before.

We’ve written about this in several previous articles. Click here and here for two examples.

He condemned the “barbaric slaughters” as “an attack on our nation.”

He said, “America weeps for the fallen,” and asked “God in heaven to ease the anguish of those who suffer.”

He unequivocally condemned “racism, bigotry and white supremacy,” saying it “warps the mind and devours the soul.”

He also promised to act with resolve by:

The president also called for unity: “Open wounds cannot heal if we are divided … Now is the time to set destructive partisanship aside and find the courage to answer hatred with unity, devotion and love…”

His political opponents didn’t like his call for unity. It’s to their political advantage to keep the nation divided.

The New York Times ran a front-page story the day after President Trump’s address under the headline TRUMP URGES UNITY VS. RACISM.

Democrat presidential candidates complained on Twitter that the headline “was too fair to Trump.”

So the newspaper caved in to the pressure and changed the headline to ASSAILING HATE BUT NOT GUNS.

Responses by Christian leaders to the mass shootings were many, and varied widely…

Texas Governor Greg Abbott said, “We ask God to bind up the wounds of all who’ve been harmed.”

Pastor and author Eugene Cho tweeted, “Heartbroken…again. We pray & grieve for all who’ve been impacted by the shooting in El Paso, Texas. It’s tragic that violence & mass shootings in America seem normal. It’s not normal. It’s insane. We can’t keep going on like this. When will we change our ways? How long, O Lord?”

Evangelist, pastor and author Greg Laurie said in a video: “There is evil in the world. Man is not basically good, man is basically sinful. Number two, there’s a devil and the devil’s not down in Hell, he’s working in the world right now. The Bible even calls him the god of this world. I think when a person picks up a gun and decides to go and slaughter innocent people, this is an act of pure evil motivated by Satan himself. We need to really be praying in our nation for a spiritual awakening because we’re seeing more and more of these acts of violence and so many other problems in our country as well.”

Jack Graham, pastor of Prestonwood Baptist Church in Texas, agrees with Laurie that the mass shootings shouldn’t be politicized. He said, “This should definitely be apolitical because it means that all of us are involved in some kind of spiritual battle… The battle is getting hotter and hotter right now and predictably so. The Bible tells us in the final hours of human history that perilous times will dome, difficult times will come. We need to remember that ultimately, it’s a spiritual solution. We can’t politicize this.”

Graham also said, “People want to minimize prayer… The most important thing we can do for people right now is pray… Because if this is … a war against evil, against Satan himself, then God has promised us a victory and that victory is in Christ alone.”

In The Daily Article, Ryan Denison summed up the Christian response to mass shooting tragedies in this way:

“The darker the night, the more crucial our light”

“While society should obviously take all effective measures to protect itself, here’s my biblical point: Jesus can change any life he touches. He can heal any trauma. He can redeem any crisis. The God who turned a murdering Pharisee into a missionary of grace can transform anyone…

“The more secularized our culture becomes, the more evangelistic our churches must become. The more people during a crisis ridicule our prayers, the more they need our prayers. The more traumatized and victimized our society, the more vital our compassion.

“The greater the threat of violence, the more urgent our message.

“That’s why we must do all we can to reach the next shooters before they strike. We must use our influence to permeate our broken culture with biblical truth and grace. We must share God’s word and love with everyone we can in every way we can.

Watch President Trump’s address to the nation after the recent mass shootings in El Paso, Texas and Dayton, Ohio (10 minutes).

One Comment on “Mass Shooting Epidemic: None Dare Call it Evil in the Heart: 12 Realities the Media Won’t Talk About [Video]”