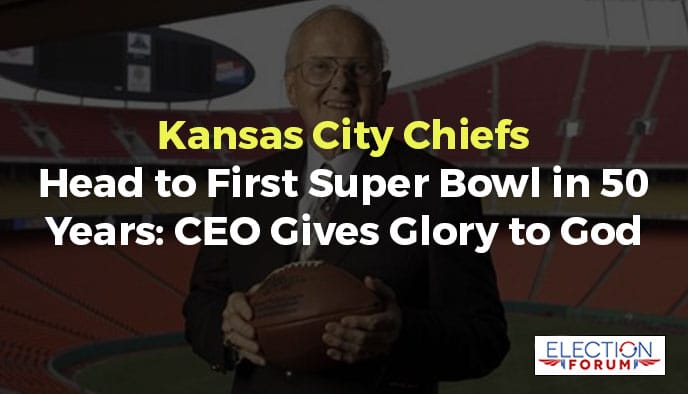 The Kansas City Chiefs defeated the Tennessee Titans 35-24 in the AFL championship football game, earning them a trip to Super Bowl LIV to play against the NFL champion San Francisco 49ers.

After the game, as Chiefs’ CEO Clark Hunt received the Lamar Hunt Trophy – given each year to the AFC championship team – he thanked the Lord for “blessing us with this opportunity.”

“The glory belongs to Him, and this trophy belongs to the best fans in the National Football League,” Hunt said.

It’s the first time the Chiefs have been to the Super Bowl since 1970, when they defeated the heavily favored Minnesota Vikings in Super Bowl IV.

In that year, Lamar Hunt was the owner and CEO of the Kansas City Chiefs…

Since 2005, his son Clark Hunt as been the CEO … and a co-owner along with his siblings.

Clark Hunt says he gave his life to Christ at the age of 10 while attending a Christian camp.

“We want our employees to develop spiritually,” he says. “In the National Football League, Christ is really glorified. My identity is my faith in Christ.”

The team partners with local ministries and the Fellowship of Christian Athletes to provide chapel worship services for their fans before home games in Kansas City.

Several of the Chiefs’ players – including star quarterback Patrick Mahomes – are also outspoken about their faith in Christ.

Super Bowl LIV will be played in Miami on February 2nd.