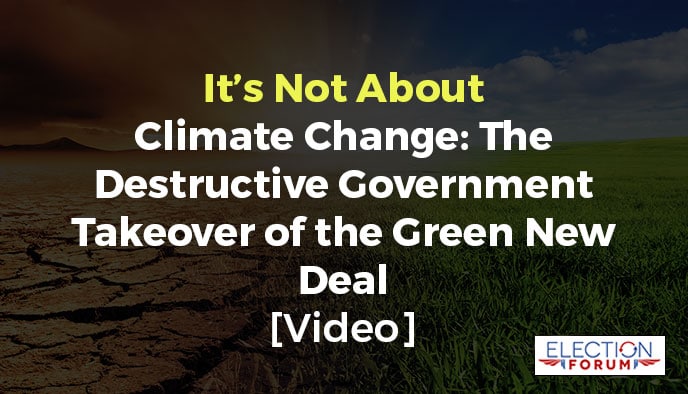 Don’t be deceived by the “Green New Deal.”

Your family and friends are being misled:

They’re not telling you the truth about the Green New Deal.

You see, it’s not about combating climate change. It never has been…

It’s about giving the federal government complete control over:

It’s the road to socialism … and it won’t impact global warming or climate change at all.

The mantra that rising carbon dioxide levels in the atmosphere pose an existential threat to the survival of the planet is just an excuse designed to make a massive, unprecedented increase in government power seem more palatable.

The Green New Deal is now being endorsed by:

The “Green New Deal” submitted to Congress lists 5 goals which are to be accomplished over a 10-year period:

On the surface, this may all sound good…

But deception does usually sound good … even if the underlying regulations to implement the legislation are evil and deadly.

Goal #5 above is a catch-all for a total takeover of American society by the federal government.

The spokesperson for the legislation is AOC – as Alexandria Ocasio-Cortez is called for short – is very open about being a socialist. She wants to transform the U.S. economy into something more primitive … and the cloak of environmentalism and climate change is the mantle she has chosen to use for that purpose.

Her chief of staff, Saikat Chakrabarti, admitted to the Washington Post that the Green New Deal was not only not based on the science of climate change, but in fact not even designed with climate change in mind at all.

The perceived urgency of dealing with climate change immediately or facing catastrophe in 12 years has added to the Green New Deal hype to give the idea a sense of legitimacy and urgency.

A word of caution: You shouldn’t listen to or take seriously any politician who claims the world is going to end unless you immediately pass my bill.

Watch this video that explains why we don’t need the Green New Deal to save the planet from certain destruction in the next 12 years (about 6 minutes). Watch video here.