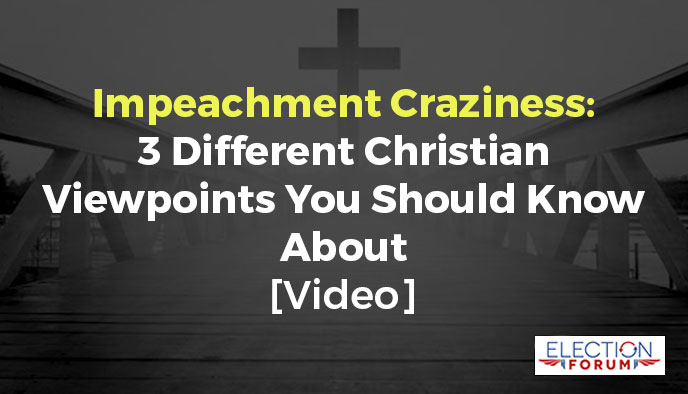 What is right or wrong about impeachment is now being debated before Congress.

Christians may have one of three different viewpoints regarding the impeachment of President Trump:

Viewpoint #1. The President didn’t say anything wrong in the phone call with the Ukrainian president.

This is what many Christian pastors, leaders and individuals who have looked closely at the transcript of the call with the president of Ukraine say…

He made no demands. He congratulated the Ukrainian president for his recent election victory.

And he made a simple request that the Ukrainian president help U.S. Attorney General William Barr – and Rudy Giuliani – with an investigation of:

There was nothing said or done or demanded or implied in the call that would constitute an impeachable offense.

This is one viewpoint…

Viewpoint #2. There are Christian pastors, leaders and laymen who say presidents asking for favors happens all the time … so President Trump’s requests were normal – from a historical standpoint.

Because President Trump did it, the socialist Democrats want to impeach him.

But asking for a favor is not an impeachable offense. It’s sad that it happens, but that’s politics.

But it’s not impeachable.

Viewpoint #3. President Trump probably made an error in judgment.

He should not have shown an interest in investigating the corruption and wrongdoing of a previous administration … or the corruption of the 2016 Hillary Clinton campaign.

You could argue that case … that perhaps that’s what the President should have done.

In that case he made a mistake … he made an error in judgment.

Every president makes mistakes and errors in judgement.

Making a mistake is not an impeachable offense.

The impeachment mantra is all politics…

It sets a terrible precedent that as soon as something happens that the opposition political Party doesn’t like, politicians and bureaucrats can accuse the president of wrongdoing – whether it be true or simply an appearance of wrongdoing…

And they can concoct an impeachment hearing in search of an impeachable offense.

And it’s quite frankly getting very tiring for everyone … even for those who hate the president.

Watch this video in which Tucker Carlson breaks down the real “impeachable offense” for which establishment politicians want to remove President Trump from office: he disagrees with the political establishment’s foreign policy goals with respect to Russia and Ukraine (5 ¾ minutes).