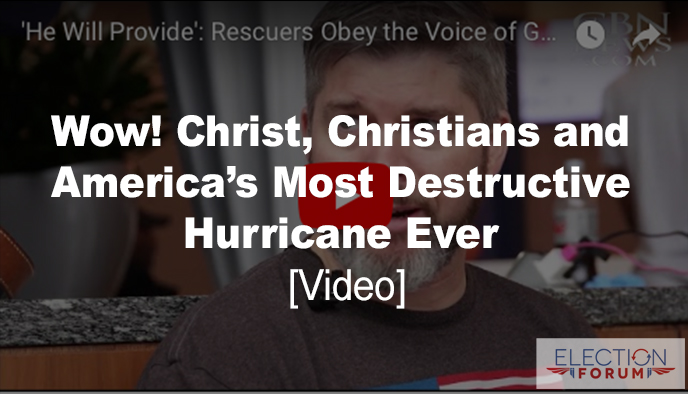 EDITOR’S NOTE: This is a special update and expansion of the Special Report sent to you earlier.

Those were the panicked words out of the mouth of one of Jeremiah and Audrey Johnston’s five children, when told they have to evacuate their shelter.

They live 2 miles from the Brazos River in Texas, which was at an all-time high due to the torrential rains of Hurricane Harvey.

“Without our faith in God, we don’t know how we could do this,” said Johnston.

As the Johnston family can testify, God is in the midst of the storm, as it says in Isaiah 4:6:

“There will be a booth for shade by day from the heat, and for a refuge and a shelter from the storm and rain.”

CLICK HERE to watch their story in this short video.

Hurricane Harvey victims are in the news … and so is God and Christians in action.

Christians are telling others how God is moving in their lives.

Many victims are praising God to the media, rescuers and anyone who will listen.

Many first-responders are praising God to the media and victims – and anyone who will listen.

The many volunteers and rescuers are praising God, saying they obeyed His voice to help save a devastated Houston.

As Christians, we need to continue to pray for everyone involved as torrential rain has hit 52 inches and continues to trigger major flooding in East Texas and Western Louisiana.

It’s not over yet. We need to:

You may have heard and seen often on TV and Facebook, commentary saying the devastation is of biblical proportions.

Thomas Paine once said, “These are the times that try men’s souls,” as the opening words in a series of pamphlets, “The American Crisis.”

He may as well been talking about Hurricane Harvey.

It is a huge American crisis.

President Trump and FEMA have responded to the crisis, noting that “Texas has never seen an event like this.” But there is only so much ground the government agencies can cover.

Yes, these are times where stranger helps stranger escape the flood waters.

This reminds me of the Scripture in Matthew 5:45:

“For He makes His sun rise on the evil and on the good, and sends rain on the just and on the unjust.”

When it pours like this, we are all one.

No doctrinal differences. No skin color. No politics.

And that is how Christians reaching out in love are acting.

(CLICK HERE to see how Samaritan’s Purse is helping).

“We want to help these people who have lost their homes, sometimes everything, in the name of Jesus Christ to put their lives back together again,” said Graham.

The Salvation Army, for example, has deployed 42 mobile kitchens and 2 field kitchens to Texas.  Each mobile kitchen can serve an average 1,500 meals per day. Salvation Army is serving at emergency shelters throughout Texas including in hard-hit Pasadena and flood-prone Houston, and has provided 400 cots to Dallas.

Small churches and megachurches like Joel Osteen’s Lakewood Church, are receiving people who need shelter and also helping evacuees with supplies such as baby food, formula and other shelter needs.

Tony Perkins’ church in Louisiana is organizing relief to take to Texas. Food, clean up supplies, water is on the way.

His Family Research Council works with a network of 15,000 pastors, who have been alerted to immediate needs.

As I went from channel to channel, be it Fox, MSNBC or CNN, people were testifying to their faith.

Whether reports were on TV, radio or newspapers, God’s love was being professed to by survivors, rescuers and even city mayors.

For those who believe God abandoned us since our fall into sin, I point to three faith-affirming reasons why He has not.

Our God loves us.

The Bible, in Luke 19:41, says Jesus wept over Jerusalem.

I believe He is weeping over Houston and the Gulf Coast today.

Let us all help with one voice and in one accord.

Watch this beautiful, spirit-filled 3-minute video that went viral of a gospel singer praising Jesus in song at a Texas shelter:

In this powerful 3-minute video, evacuees thank God for being rescued.