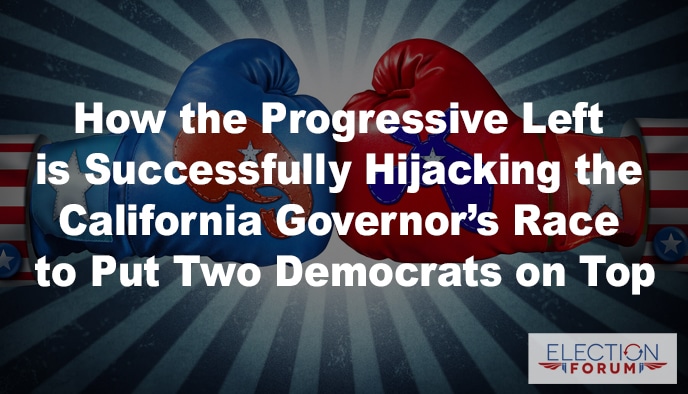 Elections can be dirty.

Too often, they are corrupted by distortions, lies and half-truths about candidates.

It’s sad, but true: Many voters – even educated and informed individuals – believe lies that are spread by dishonest campaign consultants and political activists.

So, they vote for the wrong candidate … without knowing they have been manipulated and misinformed.

For readers in California, this article is critical…For those outside California, you’ll be amazed at how corrupt politics can be.

Please take the time to read it carefully and completely.

In a dirty election, truth and integrity are tossed out the window. Citizens are robbed of their voice. And dishonest, power-hungry politicians win.

The race for Governor of California has become a dirty campaign for progressive Democrats.

In an effort to make sure two Democrats are on the November ballot for Governor, Progressive Democrats are trying to destroy the Republican candidate who is most likely to win one of the top two spots in the Primary.

John Cox is currently tied with Antonio Villaraigosa for the #2 spot in the pre-Primary polling.

The campaign against Cox is completely false. It’s fueled by lies and absurd distortions of truth.

But with millions of dollars in funding behind them, the progressive Democrats are succeeding in manipulating potentially millions of Conservatives.

The Progressive political elite have always believed that the most popular and well-known Democrat candidates – Gavin Newsom and Antonio Villaraigosa – would be the top two candidates in the Governor’s race.

They never worried about a Republican candidate, until John Cox rose to #2…and the progressives started to panic…

And they started to play dirty to ensure they win.

One specific organization – the California Charter Schools Association Advocates – wanted to ensure that Democrat Antonio Villaraigosa – the only Democrat who supports charter schools – would rise to the top. So, to make sure that their own aims succeed – and that a Democrat becomes governor – this association began pouring massive funding into a fraudulent, multi-million dollar campaign attacking John Cox.

First, they spent nearly $4 million on two direct mailers that picture John Cox and accuse him of being a former “Democratic activist.” They attack him on several accounts.

I fact-checked every single issue. None of them are true…Most are absolutely ludicrous. Here’s a mailer, below. 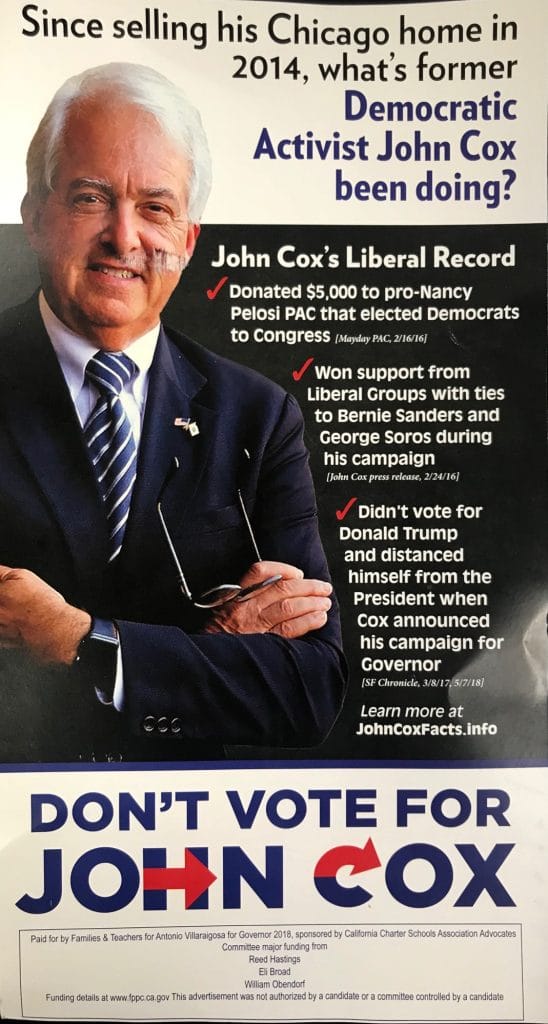 Notice the headline; It intends to tarnish his name by mentioning “Chicago” and “Democrat.”

The mailer also lists items on Cox’s “Liberal Record,” including the lie that he has ties to George Soros.

The source of this lie comes from the fact that Cox had given money to a group to help him pass a proposition on the California ballot that never gathered enough signatures to reach the ballot. George Soros had also given money to the same group for another purpose. So, Villaraigosa and the California Charter Schools Association Advocates distorted this fact to say that Cox is connected to Soros.

One of the other lies being spread about Cox is that he supports a high minimum wage.

John Cox is a strong advocate for the free market. He supported Ted Cruz for President, and he has actively been promoting the Club for Growth for 20 years, a free market think tank and political group in Washington DC.

He was also very active in the Jack Kemp for President campaign and worked with Kemp in the Reagan years.

John Cox is hardly a Democrat. But much of the state – which is already voting by mail – are believing these lies.

These types of mailers are one of the most effective ways that candidates are attacked and discredited … and they are not uncommon.

I even created a video on slate mailers (watch here). A slate mailer being circulated now says “Official Republican Voter Guide.” It contains a picture of a letter from the Republican party … a donation opportunity on another page … and finally, marked ballots choosing Progressive Liberals, not Republicans.

It’s not obvious that the candidates marked are Democrats.

The goal is for Conservatives who receive this mailer to use it to vote—for Democratic candidates who don’t support their values.

This is the type of marketing that is being used by Progressives. They are falsely attacking Cox as a “Democratic Activist” when in reality, they are Democratic activists themselves.

But the fine print on the bottom of the Villaraigosa mailer about Cox tells a different story.

Villaraigosa and his corrupt campaign didn’t limit their efforts only to mail.

Right now in California, millions of Conservatives who care about the Second Amendment, the right to life and other issues are being called and told,

“Hello Mrs. Jones. I wanted to let you know that John Cox is financed by George Soros, and he opposes your right to own guns.”

These phone operators know your values, and they will target you with these lie-filled phone calls.

In reality, John Cox is a supporter of the second amendment and gets an A from the NRA. He has never donated to George Soros. In fact, John Cox is the polar opposite of George Soros in his values, positions and ideology.

The extreme distortion of truth being used by his political opponents – both Republicans and Democrats – is dishonest and shocking.

Here’s another lie that these telemarketers are telling Conservatives all over the state:

“Hello, Mr. George. I know you’re against abortion, and I have to tell you, John Cox has been inconsistent and can’t be trusted. He will not do anything about abortion. That’s why so many pastors are opposed to him.”

The truth is, most pastors, Church leaders and pro-life leaders support John Cox. He’s the only one who has won the endorsement of pro-life groups, including the Pro-life Council.

Unfortunately, this type of libel in a campaign is not unique.

It reminds me of the time I ran for office, and political opponents showed “my house” – a mansion in Miami with a yacht in the backyard. In reality, I live in a 1954 ranch-style house.

In the same campaign, I was accused of being financially corrupt because I had a former investment newsletter client who was sued by a shareholder. I hadn’t worked with this client in years.

But my opponents didn’t care about truth. They cared about ensuring that their political and ideological aims succeeded.

Likewise, Villaraigosa and the progressive Democrats are using deceit as a weapon against their opponents…and succeeding.

Conservative voters must not fall for these lies.

The sad truth is, many people are believing the hateful, false propaganda being spread by people who do not share their values.

I have received hundreds of emails from people who are warning me about Cox being a Democrat and friend of George Soros. They have been exposed to the lies being spread about Cox by the Progressive left.

Many have encouraged me to support Republican Travis Allen, who doesn’t have a chance of winning.

In reality, Travis Allen and John Cox are almost identical on the political and economic positions they hold (see comparison chart below). 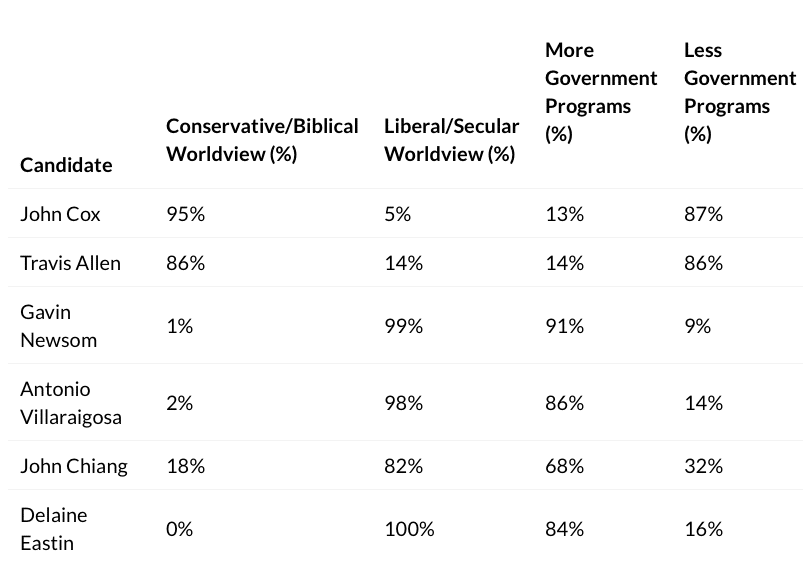 John Cox and Travis Allen do have three important differences:

Travis Allen cannot run a viable campaign. He has been consistently #5 or #6 in the polls. Donald Trump wants a winner, so he chose John Cox.

Voting for Allen in the primaries will help ensure that Cox doesn’t win – and that the top two candidates will be Democrats. Voting for Travis Allen, or any other Republican except for John Cox, is basically a vote for Antonio Villaraigosa.

Don’t be fooled by the lies that may be coming through your telephone.

This is all part of a deceitful political campaign meant to ensure that Villaraigosa wins the #2 in the primary… so that he has a chance at beating Gavin Newsom. It would also mean that John Cox – or any Republican – will not be the next Governor.

And your free-market, pro-family, pro-freedom values will not be supported.

Instead, California will continue down the same dangerous path of economic and moral destruction.

This makes it all the more important that you vote in the California primary on June 5th.

If you sit out the primary election and don’t vote, you are basically choosing another progressive Democrat to be the next Governor of California.