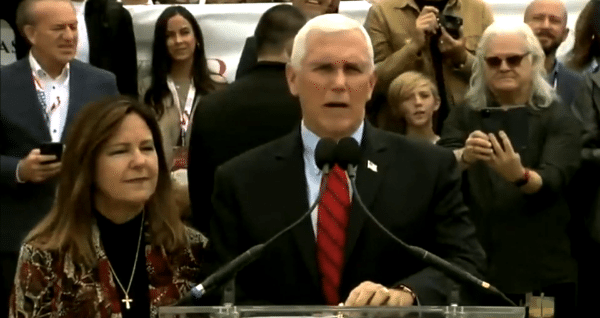 It was also the most important exposure of the two people who could become President of the United States.

Here are 13 surprising things every Christian should know:

Every vice president is important…

The vice president could become the president in case of death. This has happened 8 times in U.S. history – including:

With Donald Trump at 74 and Joe Biden at 77 – the oldest major party candidate ever to be nominated for president – it’s a possibility.

And when the next presidential term ends in 2024, neither Trump nor Biden will run again. That means that whoever is vice president in 2024 will probably receive his or her party’s nomination for president.

2. On faith and political ideology, Mike Pence and Kamala Harris are as far apart as can be.

Pence likes to say, “I’m a Christian, a conservative, and a Republican – in that order.”

He believes in limited government and individual liberty … and especially free speech.

Harris has been a leader in socialism and in advancing pro-socialist policies. As Attorney General of California, she used the power of government to trample individual rights and to limit free speech.

For example, she prosecuted a pro-life undercover reporter whom she disagreed with and disliked because of his pro-life speech.

During the debate, the issue of abortion came up.

Harris is the most pro-abortion Senator in Congress.

Pence is one of the most pro-life vice presidents ever.

When Harris was asked about the judicial activism of the Roe v. Wade decision allowing abortion nationwide, she said:

“I will always fight for a woman’s right to make a decision about her own body. It should be her decision and not that of Donald Trump and Vice President Michael Pence.”

Pence responded, “I couldn’t be more proud to serve as vice president to a president who stands without apology for the sanctity of human life. I’m pro-life. I don’t apologize for it. And this is another one of those cases where there’s such a dramatic contrast. Joe Biden and Kamala Harris support taxpayer funding of abortion all the way up to the moment of birth… they want to increase funding to Planned Parenthood of America.”

“Now, for our part,” Pence continued, “I would never presume how judges rule on the Supreme Court of the United States, but will continue to stand strong for the right to life.”

The Constitution doesn’t specify how many justices must sit on the Supreme Court.

In order to shift the Court into an activist, legislative body.

In the debate, Mike Pence accused Biden and Harris of wanting to “pack” the Court with judicial activist justices.

“Joe and I are very clear. The American people are voting right now. And it should be their decision about who will serve on this most important body for a lifetime.”

Harris spoke against the confirmation of Amy Coney Barrett to fill the Supreme Court vacancy created by the death of Ruth Bader Ginsburg.

The president has both a right and a constitutional duty to nominate a replacement for a vacant Supreme Court seat, even if only a few weeks remain until the 2020 election.

If this election ends up being decided by the Supreme Court – as was the 2000 election between Al Gore and George W. Bush – it will be critical to have 9 justices on the Court for that decision, not 8.

6. Claiming to be people of faith?

Kamala Harris said she and Joe Biden are both “people of faith.”

Biden’s “faith” he says is Catholic. But he stands against his church on abortion. And:

Harris? She’s been exposed to a mixture of Hindu, Christian and Jewish beliefs. Whatever “faith” she may have is her own brand of secular humanism with some San Francisco bay area religious undertones mixed in.

Their “faith” is not traditional Christianity … it is false religion.

7. The China tariffs, the trade war and jobs.

Harris claimed that President Trump’s tariffs on China resulted in the loss of thousands of American jobs … and that we lost the trade war with China.

“Lost the trade war with China? Joe Biden never fought it. He’s been a cheerleader for the Chinese Communist Party for decades.”

Pence also noted that 200,000 American manufacturing jobs were lost when Biden was vice president, and that Obama had said those jobs would never return to the U.S.

Pence criticized China for downplaying the seriousness of the coronavirus and for mishandling the effort to pinpoint the source and cause of its leak.

Those watching the debate in China saw their TV screens go black during Pence’s critical remarks. They came back on when Harris praised China and its leader.

Harris said the Trump/Pence response to the coronavirus pandemic was “the greatest failure of any presidential administration in the history of the country.”

Pence pointed out that President Trump acted so quickly to ban travel to and from China that he was accused of being racist and was called xenophobic and other names for being paranoid and for overreacting.

He also reminded Harris and the audience that:

9. The economy: jobs, income and opportunity.

Harris blamed Trump for the COVID shutdown and the resulting economic fallout.

Pence responded with some facts the media and the Biden campaign haven’t been willing to admit:

“We’ve already added back 11.6 million jobs because we had a president who cut taxes, rolled back regulation, unleashed American energy, fought for free and fair trade, and secured $4 trillion in the Congress of the United States to give direct payments to families, saved 50 million jobs through the Paycheck Protection Program. We literally have spared no expense to help the American people and the American worker through this.”

Harris said that Biden “will not raise taxes on anyone who makes less than $400,000 a year,” and that he will not do away with the fracking method of extracting oil.

She also claimed it was the Obama-Biden administration’s Recovery Act that brought the country out of the 2008 recession, but that the Trump-Pence administration wants to take the credit.

Pence replied later in the debate:

“Senator Harris is denying the fact that they’re going to raise taxes on every American. Joe Biden said twice in the debate last week on day one he was going to repeal the Trump tax cuts. Those tax cuts delivered $2,000 in tax relief to the average family for cost.”

Mike Pence brought up the biggest scandal in history: the FBI spying on the Trump campaign and the ongoing Russia-collusion investigation that continued after the 2016 election and for the first 3 years of the Trump administration.

It’s now known that the entire Russia collusion hoax was concocted by the Hillary Clinton campaign to divert attention from the FBI investigation of her email scandal.

12. The bias of the moderator.

It would have been so refreshing to have a neutral moderator asking tough questions to both candidates.

But that was not the case.

In contrast, the questions for Pence were brutal – even the first one.

13. The performance of the candidates.

Neither candidate made a mistake or blunder.

Harris was abrasive. She scoffed and smirked and displayed a bad attitude. She did not act presidential.

Pence acted very presidential. His “worst” moment was when a fly landed on his hair – which social media became more obsessed over than the content of the debate.

Bottom Line: The contrast in leadership and in policy was clear.

Pence won. Harris didn’t lose, but she failed to win the hearts and minds of America.

To listen to Mike Pence’s words at the National and Global Day of Prayer and Repentance on the Washington, D.C. Mall on September 26th, 2020, click  here (6 ½ minutes)

One Comment on “Heartbeat Away: 13 Surprising Things Every Christian Should Know About the Pence/Harris Debate … and their Race [Powerful Franklin Graham March Video]”