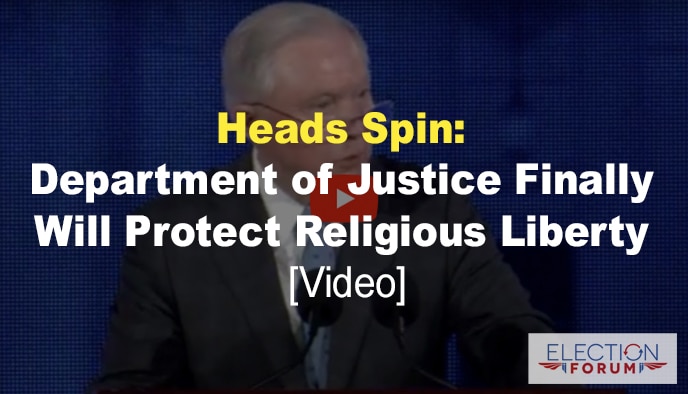 For the first time, the Department of Justice has declared it will protect and defend religious liberty – not be at war with people of faith.

What just happened at the recent Alliance Defending Freedom (ADF) Summit on Religious Liberty is historic … not only for Christians … but for people of all religious faiths.

Sessions explained that the purpose of the task force is to “help the department fully implement our religious liberty guidance by ensuring that all Justice Department components are upholding that guidance in the cases they bring and defend, the arguments they make in court, the policies and regulations they adopt, and how we conduct our operations.”

As President Trump promised, he is dead serious about making the preservation of religious liberty in America – and around the world – a priority again.

In the first 18 months of the Trump administration, the DOJ has brought 11 indictments and received 7 convictions for hate crimes involving attacks or threats of attacks against places of worship – the majority of which have been non-Christian houses of worship.

Haven’t heard about these cases in the mainstream media?

Instead, reaction to the Religious Liberty Task Force from progressive media outlets was swift, biased, sarcastic, and full of false accusations:

The author of the article in The Daily Beast blatantly claimed Sessions “declared war on anything that could be perceived to trespass on the ‘religious freedom’ or ‘religious liberty’ of Christians… Sessions said this was because there was a ‘dangerous movement’ to erode the Christian right to worship.”

Nothing could be further from the truth…

“A dangerous movement, undetected by many, is now challenging and eroding our great tradition of religious freedom… Our founders gave religious expression a double protection in the First Amendment. Not only do we possess a freedom to exercise our beliefs, but we also enjoy the freedom of speech.”

No mention of war against LGBT people or any other group…

No mention of Christianity or Christian worship…

In fact, the panel of speakers that shared their personal religious liberty battles following Sessions’ speech included a Chabad Jewish rabbi and a Sikh lawyer in addition to Christian baker Jack Phillips.

Sessions remarked, “We have gotten to the point where courts have held that morality cannot be a basis for law, where ministers are fearful to affirm, as the understand it, holy writ from the pulpit, and where one group can actively target religious groups by labeling them a hate group on the basis of their sincerely held religious beliefs.”