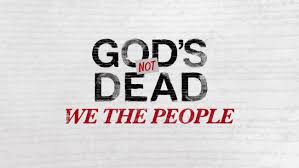 My wife and I took a look at the latest release in the series, God Is Not Dead.

The movie was powerful.

It touched on many different topics – even the persecution of Christians overseas.

But the main emphasis was the persecution in the U.S. by many trying to marginalize and outlaw homeschooling in America.

School districts, the educational establishment, and the pro-Socialists are enemies of homeschooling.

They see it as a big threat.

And the hostility against homeschooling has grown since the pandemic is government school lockdowns.

This movie depicts well the perspective of restricting homeschooling based upon social services overreach, a hostile judicial activist, and what is done to fight back.

It touches on relativism and no absolutes vs. truth.

It also covers Christians in politics, parental rights, and exposes the evil of much of the curriculum today with Common Core and a nationalized education curriculum.

The movie is from a Christian worldview, but the main emphasis is about freedom and the Constitution.

While the acting and the production is good – it is certainly not a Hollywood production.

But it is one that I encourage every Christian to watch and to share with their people in their home Bible studies and Christian relatives.

You can watch “We the People” which was released in 2021, on Google Play, Apple TV, Amazon Prime, Vudu and YouTube.

After you watch it, tell me what you think.

Let me know at craig@electionforum.org.

One Comment on “God is Not Dead: We the People – A Movie About Religious Liberty and Homeschooling”