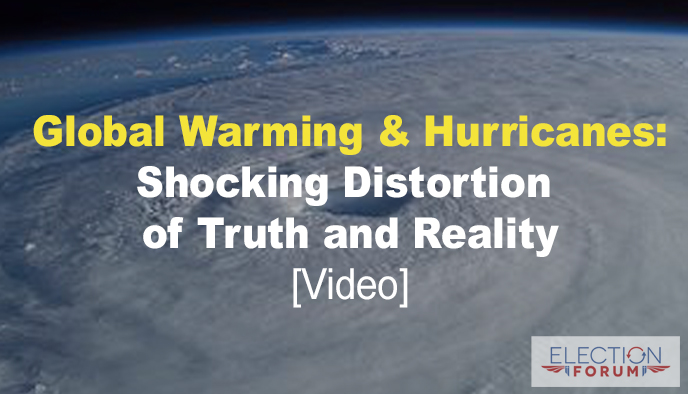 The media, politicians and social media are blaming global warming for Hurricane Harvey and Irma.

Like a Hollywood movie, a villain is needed for every catastrophe.

Why not climate change?

Man’s modernization of the planet is at fault. Too much carbon, too many factories, too much pollution. Too many people!

To blame any hurricane on global warming is scientifically and ethically wrong.

“Factually, it’s not a correct assumption,” said Bjorn Lomborg, who studies the economic impact of weather and authored the book, “The Skeptical Environmentalist.”

CLICK HERE to hear an insightful short interview with Lomborg.

In the past 140 years, we have seen fewer hurricanes hit the U.S., both big and small.

Despite the fact no major hurricane has hit America in 12 years, proponents of global warming push their agenda on the false notion that a warming earth is to blame for the devastation.

The progressive media falls in step with liberal theology and liberal scientists. There must be a villain:

Don’t believe the media, which pushes theories and guesses as facts.

Has anybody in the media bothered to ask, “How do the global warming experts know this?” Where are the rock-solid statistics? Where is the proof?

As one respected scientist noted, science, particularly global warming science is based on theories, models and guesses – all driven by ideology, grant money and politics.

Theories are not facts.

Wild guesstimates married to a progressive agenda blames man for all of Earth’s weather issues:

WHAT THE GLOBAL WARMING DEBUNKERS ARE SAYING

Dr. Roy W. Spencer has been debunking global warming for years, including testifying before the Senate.

What do we know about it? Almost nothing, says Dr. Spencer., certainly nothing on par to Al Gore’s Armageddon.

“Nearly every century might experience global warming or cooling, going back to the Roman period of time,” he said.

Climate changes naturally, he said, adding that most “models” dealing with global warming are guesstimates and often inaccurate.

Spencer knows what he’s talking about. His claim is that Hurricane Harvey and Irma are natural weather disasters which have always occurred and always will occur.

He is a meteorologist and principal research scientist at the University of Alabama, and author of the books “The Great Global Warming Blunder: How Mother Nature Fooled the World’s Top Climate Scientists” and “Climate Confusion: How Global Warming Hysteria Leads to Bad Science, Pandering Politicians and Misguided Policies That Hurt the Poor.”

But… but… look at the fury of Harvey and Irma. Global warming takes some of the blame, right?

Not really. No matter how many well-intentioned and kind people want to believe it.

She said anyone blaming Harvey on global warming doesn’t have a leg to stand on.

It’s an inconvenient truth for the global warming crowd, but Harvey broke up a 142-month drought in U.S. hurricanes. It was the longest period without hurricanes since the 108 months from Aug. 11, 1860 to Sept. 8, 1869.

A Category 4 hurricane struck Galveston, Texas in 1900, killing 6,000 people. Why don’t we blame global warming for that, too?

Hurricanes are not becoming more frequent.

In the last 47 years, four Category 4 or stronger hurricanes hit the U.S. But in the 47 years prior to that there were 14, more than three times as many.

AS CHRISTIANS, WE KNOW GOD IS IN CHARGE

“…For He makes His sun rise on the evil and on the good, and sends rain on the just and on the unjust.” (Matthew 5:45)

“ For I know the thoughts that I think toward you, says the Lord, thoughts of peace and not of evil, to give you a future and a hope.” (Jeremiah 29:11)

We have a hope and a future with God, and that includes through storms and hurricanes.

Let us not forget that:

One day this broken and fallen world will be gone and we as Christians will live in a “new heaven and a new earth.”

“Now I saw a new heaven and a new earth, for the first heaven and the first earth had passed away. Also there was no more sea.”

When Jesus returns, our hurricanes will be over!

4 Comments on “Global Warming and Hurricanes: Shocking Distortion of Truth and Reality [Video]”