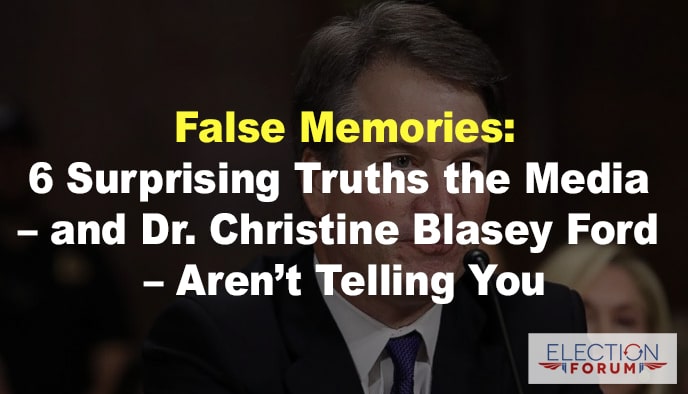 A false memory is a recollection of something someone is sure happened to them … but in reality, didn’t happen. Or, what actually did happen was different than the memory of it.

Perhaps this has happened to you…

Here are 6 little-known truths you should know about false memory … and how they can impact many innocent people.

The media and politicians ignored these truths during Dr. Ford’s testimony before the Senate Judiciary Committee in the hearings on Judge Brett Kavanaugh’s confirmation to the Supreme Court:

In 2015, the National Academy of Sciences released a report summarizing decades of evidence demonstrating that common mental processes cause us to “recall things we never experienced.”

Memory and recall errors contributed to the wrongful criminal convictions of 75% of the first 250 cases in which DNA evidence later exonerated the imprisoned individuals.

In a bizarre 1975 case, a young woman – while watching a TV show in her home of an expert criminologist discussing the inaccuracies of eye-witness testimony – was brutally raped by an intruder.

The emotional trauma of her experience caused her to falsely identify the person she was watching on TV as her rapist.

As we witnessed in the Brett Kavanaugh hearings, possible false memories combined with compelling and “credible” – but uncorroborated – testimony is often the rule rather than the exception in establishing guilt.

The National Academy of Sciences report cited above describes memory as “an amalgam of constructive and reconstructive processes” – including imagination.

It concludes that the assumption that human recall can provide literal, accurate and detailed descriptions of past events is “indisputably false.”

George Santayana, in “The Life of Reason: Human Understanding,” says this:

“Memory itself is an internal rumor; and when to this hearsay within the mind we add the falsified echoes that reach us from others, we have but a shifting and unseizable basis to build upon. The picture we frame of the past changes continually and grows every day less similar to the original experience which it purports to describe.”

I was convinced a furniture store was on the north side of a freeway. My wife couldn’t remember. I was wrong, but I had become so convinced I was right, I wondered if they had moved. They hadn’t. I don’t know how I could have been so wrong!

In 1984, a college student was raped at knife-point in her apartment…

A few days later she identified her alleged assailant from a series of police photos.

In a New York Times article, “I Was Certain, but I Was Wrong,” she wrote that she “knew this was the man. I was completely confident. I was sure.”

When she was confronted in court 3 years later with her actual attacker – determined from DNA analysis – she stated, “I have never seen him in my life. I have no idea who he is.”

Based on her testimony – and despite DNA evidence to the contrary – a man was falsely convicted – twice – of a crime he didn’t commit … and spent 11 years of his life in prison.

The National Academy of Sciences report found that strong emotions produced by a traumatic event cause a “breakdown of the relationship between accuracy and confidence.”

What this means is that each time a stressful event is retold, the emotions elicited by recalling the event will increase the likelihood that false memories will be bolstered by a stronger and stronger conviction that the false memories are accurate.

Cornelius Ryan, author of “The Longest Day,” also came to the same conclusion after studying thousands of battlefield interviews. He wrote, “…one fact stands out more than any of the others – the very worthlessness of human testimony unless it can be substantiated by documents supporting the testimony.”

Dr. Ford’s testimony before the Senate Judiciary Committee was emotional, compelling, and – to the members of the committee and to most Americans – extremely credible.

She passed a polygraph test, indicating that at the least, she sincerely believed she was telling the truth…

Yet the field of psychology has established unequivocally that the believability of personal testimony does not provide any evidence or proof regarding the truth or falsehood of that testimony.

To judge one person’s account of a long-ago traumatic event to be accurate and truthful – based solely on the person’s demeanor and emotion while testifying – is to ignore the science of memory.

No one knows this better than psychology professor Dr. Christine Blasey Ford.