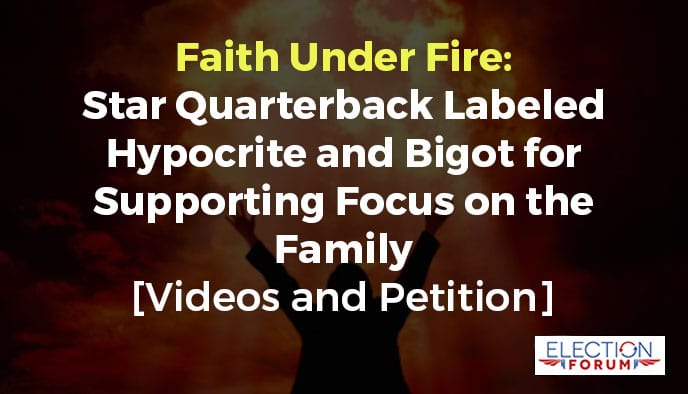 “Love all, Respect all, Accept all.”

This is the philosophy Drew Brees – star quarterback of the New Orleans Saints and an outspoken Christian – lives by … with his family, his teammates and his neighborhood and community.

Despite his philosophy of tolerance, the intolerant Big Easy Magazine and progressive web sites have branded him as a hypocrite and a bigot.

Because he created a video for Focus on the Family encouraging students to bring their Bibles to school on October 3rd – Bring Your Bible to School Day.

Focus on the Family has been labeled a “hate group” by the SPLC –Southern Poverty Law Center – and others because they advocate traditional marriage between a man and a woman … and do not support transgenderism.

If you think about it, the socialists and progressives who trash Christians and their biblical world view beliefs are the real hate group…

They claim the mantle of tolerance, but they are hypocritically intolerant of anyone who disagrees with their political ideology.

And they are bigots because they believe they are superior to all who do not share their enlightened views of sexuality and gender identity.

Watch the short 25-second video that landed Drew Brees in hot water with the socialists, progressives and the LGBTQ+ advocates.