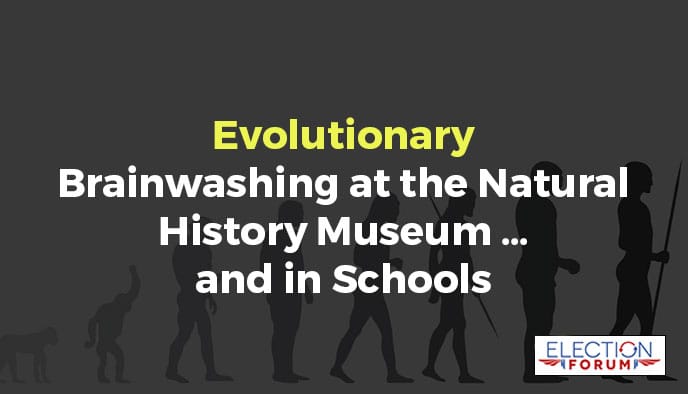 My wife and I recently went to Washington D.C. for a meeting with President Trump.

During that trip, we decided to go to some of the museums in the area.

Recently, $110 million was spent to refurbish the Natural History Museum with new exhibits and a complete renovation.

Unfortunately, down every hallway, evolution – Darwinism – was presented as fact.

But Darwinian macro evolution by natural selection is a theory. It is not scientific fact … the evidence is far from being conclusive.

Yet the media, many secular politicians, and teachers in schools present it as indisputable fact.

The propaganda and the indoctrination of visitors with assumptions treated as facts was neither subtle nor minimal. It was a propaganda museum.

Did you know that more than 1,000 Ph.D. scientists have signed a statement dissenting from Darwinism?

The Discovery Institute has a list of scientists who disagree.

Their petition, A Scientific Dissent from Darwinism reads “We are skeptical of claims of the ability of random mutation and natural selection to account for the complexity of life. Careful examination of the evidence of Darwinism should be encouraged.”

It further states, “To limit teaching to only one idea is a disservice to students because it is unnecessarily restrictive, dishonest, and intellectually myopic.”

Famous scientists have signed the declaration. You can see it here.

You can also learn more about the problems with the theory of Darwinian evolution here and here.

The determination of the secular world to disregard not only creationism, but also any doubt about evolution and Darwinism – and that any doubt or dissent is non-scientific – is pervasive.

In fact, those who believe in creationism – or in the intelligent design theory – are ridiculed.