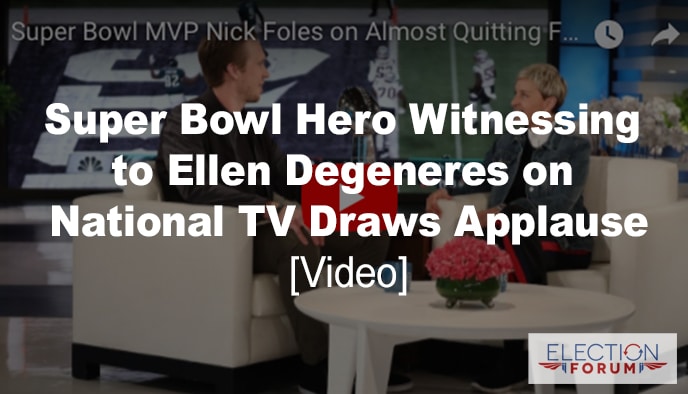 Most Christians hide their faith or avoid exposing it on national TV … for fear of possibly offending someone.

While not outright sharing the gospel, he didn’t hide his Christian faith or downplay its importance in his life.

The gutsy and heroic play of the Philadelphia Eagles backup quarterback earned him not just a Super Bowl victory – the first in franchise history for the Eagles – it also earned him the coveted MVP award.

He was struggling both personally and as a player…

He had lost his joy of the game … and he almost quit professional football.

But with the encouragement of his wife, he brought the decision to the Lord in prayer.

On the 4th day of training camp with the Kansas City Chiefs, the joy came back into  his heart.

“I was reading the Bible in the morning and journaling,” he told Ellen. “I remember just crying because I was like, ‘I love the game of football again.’”

But it was a deeper love and commitment this time … because of his own experiences of failure.

His failures – plus his willingness to face his fear of future failure – strengthened his faith and made him a stronger person.

The apostle Paul explains how this process of character building works:

Watch this 5-minute video of Nick Foles’ appearance on the ‘Ellen’ show: