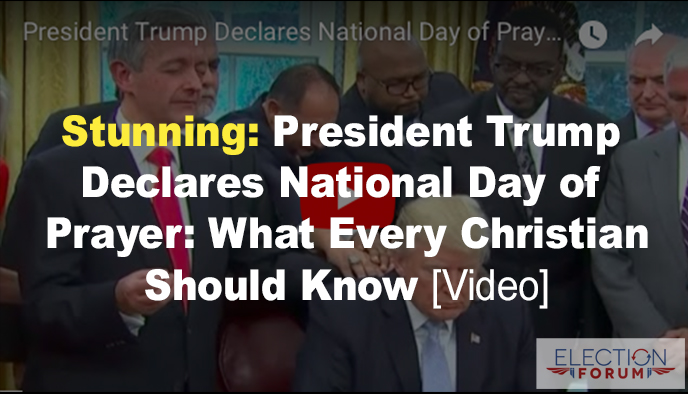 hurricane, Christians and Christ … we will

Watch this incredible 10-minute video of church leaders praying and laying hands on President Trump after he signs the National Day of Prayer proclamation.

What Trump’s call to action has done is:

This comes on the heels of Vice President Mike Pence and Texas Gov. Greg Abbott proclaiming Sunday as a National Day of Prayer in Texas.

You probably don’t know this, because it’s largely under the radar.

The gospel is being proclaimed and spread … because of Hurricane Harvey on TV, the Good News is being declared on radio, Facebook, Twitter, newspapers.

The love of Jesus is being glorified and magnified.

The crisis has galvanized and united our country, except those in the liberal media.

The media has mostly ignored … and some criticized the Vice President Pence and Texas Gov. Greg Abbott proclaiming Sunday a Day of Prayer.

In part, it reads:

WHEREAS, it is right and fitting that the people of Texas should join with their fellow residents and with others from across the country and around the world to seek God’s wisdom for ourselves and our leaders and ask for His merciful intervention and healing in this time of crisis…

Gov. Abbot was accompanied by Pence and his wife, Karen Pence, and Rev. Franklin Graham, whose relief organization, Samaritan’s Purse, is on the ground in Southeast Texas offering relief and mobilizing volunteers.

“It was God, acting through the lives of so many Texans, who came to the rescue of other Texans. It was the power of God that was able to pull the people out of the water and literally save them,” the governor said.

Prior to Abbott’s remarks, the Rev. Graham recalled the Gospel story of Jesus and his disciples in a boat during a storm.

“You’ve gone through a storm, and let me tell you, the Lord Jesus Christ, he’s still here,” Graham told the crowd gathered in Rockport.

Praise God for political leaders who know God, who seek God, and:

He is our refuge and shelter from the storm and rain (Isaiah 4:6).

And yet it is individuals who praise God through the storm.

Take the Johnston family for example:

Those were the panicked words out of the mouth of one of Jeremiah and Audrey Johnston’s five children (three of which are triplets), when told they have to evacuate their shelter.

They were 2 miles from the Brazos River in Texas, which was at an all-time high, due to the torrential rains of Hurricane Harvey.

“Without our faith in God, we don’t know how we could do this,” said Johnston.

Dad Jeremiah Johnston was just one of many who gave a tremendous testimony of their trust in Jesus on national TV.

When asked, “Why would a loving God although this catastrophe to happen? Johnston replied:

“That is a brilliant question. The No. 1 reason people walk away from their faith is because they don’t have an answer, but we as believers lean on Romans 8:28: ‘God will cause all things to work together for good.’

“We live in a fallen world because of sin, evil reigns, that is why we need a Savior, this is why Jesus came to our world to give us hope we can’t find on our own … The beauty of the Christian faith is we attempt to answer the question of evil. Jesus will never ever leave us or forsake us. We are displaced but we feel His presence and His love’.”

And yet Christians, along with conservatives and Republicans as a group, are stigmatized and mocked, slandered for their faith and optimism in the greatness that is America, by the liberal elites and the media.

Despite the “anti-God rhetoric… this anti-Christian spirit, I choose to believe what James 1:17 says, that ‘Every good thing comes from above’,” said Johnston.

SUNDAY IS A NATIONAL DAY OF PRAYER: LET’S ALL JOIN IN

President Trump’s and Gov. Abbott’s proclamations are a call to action for Christians:

Let’s take to heart 2 Chronicles 7:14 so that we may heal our land:

“If my people, who are called by my name, will humble themselves and pray and seek my face and turn from their wicked ways, then I will hear from heaven, and I will forgive their sin and will heal their land.”

As Christians, we need to continue to pray for everyone impacted by the epic devastation – the loss of everything for many.

And it’s not over yet. We need to:

Watch this moving 8-minute video with Gov. Abbott and Vice President Mike Pence as Karen Pence prays for all involved with the hurricane.

4 Comments on “Stunning: President Trump Declares National Day of Prayer: What Every Christian Should Know [Videos]”