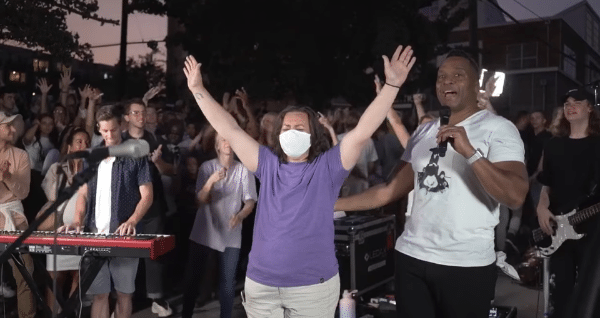 Sean Feucht’s concerts are growing in numbers and locations nationwide.

In Sacramento, the politicians are outraged that 12,000 people attended Sean’s concerts and listened to the gospel …”illegally.”

In the failed Democrat-Socialist city of Portland, Oregon, 7,000 people came amidst intimidation by rioting mobs.

In Seattle, the politicians shut down the one park Shawn was going to go to … and when they did, thousands came anyway to a “gospel protest” in the street.

Fact #1: Seattle – like Sacramento and other cities Sean went to – is a city in chaos, with rioting, looting and killings.

The city has turned its back on safety, freedom … and the gospel.

Fact #2: Sean choose to go to Seattle, one of the worst, most dangerous cities to have his concert and Bible studies, despite the threats and dangers.

Antifa, BLM and others involved in violence all threatened the gathering.

Fact #3: The fundamental right of Americans to worship according to their conscious is being crushed by tyrannical state and local leaders … and Christians demonized by the biased media and Democrat-Socialist politicians.

And the results were amazing.

Fact #4: The protesters tried to pour blood on Sean and disrupt the event.

Sean’s security stopped the disruptions. His security team was squirted with a red liquid — looking like blood — from the terrorists.

In Washington D.C. next week, The Return — a national and global Day of Prayer and Repentance — will see thousands attend.

Please pray for repentance and revival.