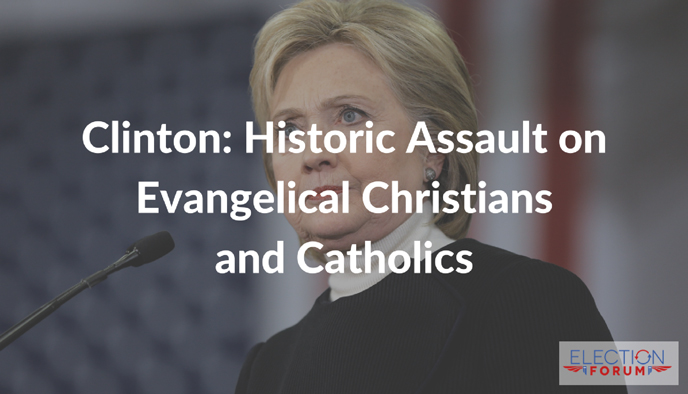 Hillary Clinton’s attack on Christians of all backgrounds is historic.

During an April 2015 speech to the Women in the World Conference, Hillary Clinton said: “Deep-seated cultural codes, religious beliefs, and structural biases have to be changed” for the sake of giving women access to “reproductive health care and safe childbirth.

Check out the video.

And at the infamous “Basket of Deplorables” speech at September 9th New York City Lesbian, Gay, Bisexual, and Transgender (LGBT) fundraiser, Clinton said: “You know, to just be grossly generalistic, you could put half of Trump’s supporters into what I call a “basket of deplorables. Right? The racist, sexist, homophobic, xenophobic, Islamophobic—you name it.”

And, how does the Clinton campaign feel about Catholics?

John Halpin of the radically liberal Center for American Progress joined in the hatred against people of faith.

Here are samples of their hateful rhetoric toward Catholics and their religion:

“An amazing bastardization of the faith.”

“They must be attracted to the systematic thought and severely backward gender relations and must totally unaware of Christian democracy.”

Podesta discussed with the Clinton campaign the idea of infiltrating the Catholic Church and imposing a new progressive ideology, one which he dubbed “The Catholic Spring.” Groups like Catholics in Alliance for the Common Good—funded by radical leftist billionaire George Soros—were created for these destructive, subversive ends.

But why do Clinton staffers betray such hateful hostility to Catholics?

Because her agenda does not line up with their values at all on marriage, abortion, and religious freedom.

Catholic bishops throughout the country are informing their congregations:

Hillary Clinton is not just radically pro-abortion, but she expects all religions and people of faith to change their views to accommodate the destruction of innocent life.