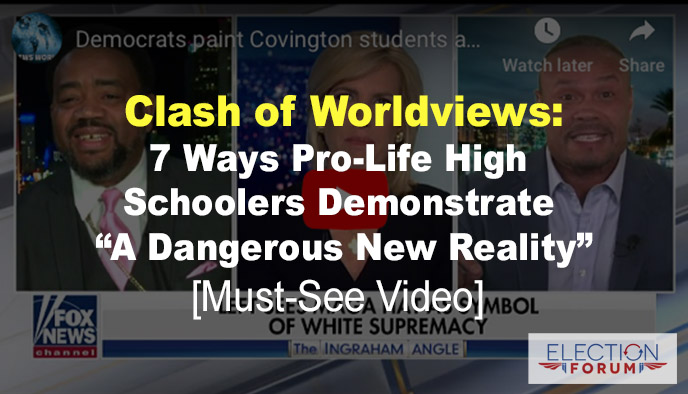 And the two different realities are based on ideology, not truth.

The students were at the pro-life march in Washington DC – which, by the way – was completely ignored by the media.

They were wearing MAGA hats…

The media used one short video clip that completely distorted what really happened.

From this out-of-context “sound bite” have come two different views:

The reality is the kids were falsely accused … but they are just high school kids.

It was falsehood. Shame. But no confirmation. Just rage. The kids were first verbally assaulted by members of a racist cult, Black Hebrew Israelites. Then, a Native American came up and started beating a drum in the face of one of the pro-life kids.

Politicians and the media are now saying Trump is racist, so anyone wearing the MAGA hat is also racist.  Some are saying the hats must be outlawed and illegal to wear in public.

They were turned into monsters by the media … and many believe they really are monsters. They will suffer consequences from this media attention – and the threatening vitriol it has produced – for a lifetime.

The media and politicians saw this as a double win – an attack on both pro-life supporters and on Trump supporters.

Two liberals said it themselves on The View. Whoopi Goldberg commented that so many people make snap judgments before the facts are in.  She asked, “Why do we keep making the same mistake?”  Co-host Joy Behar answered: “Because we’re desperate to get Trump out of office, that’s why.”

As Christians, we should remember the caution we are given in Proverbs 18:13 –

“He who answers a matter before he hears the facts – it is folly and shame to him. (Amplified Bible)

Postmodern relativists embracing a collectivist/socialist worldview have created a new “truth”- their own.  Their “truth” interprets the world as they want to see it – as they believe it should be – not as it really is.

They have a mission … a zeal. They see their job as spinning the news to support their viewpoint.

One takeaway from this incident is that our social divide is becoming deeper. Based on ideology and worldview, two people can watch the same video and come to completely different conclusions about what the video is showing.

Watch this 13-minute debate between a liberal pastor and a conservative podcast host about the video clip of native American Nathan Phillips beating his drum in the face of a Covington high school student who is wearing a MAGA hat – during the March for Life rally in Washington DC.

Now watch this discussion on Fox New’s The Five about how social media intentionally seeks to divide Americans … and how the news media falls right into the trap and exacerbates the divide (about 11 minutes).