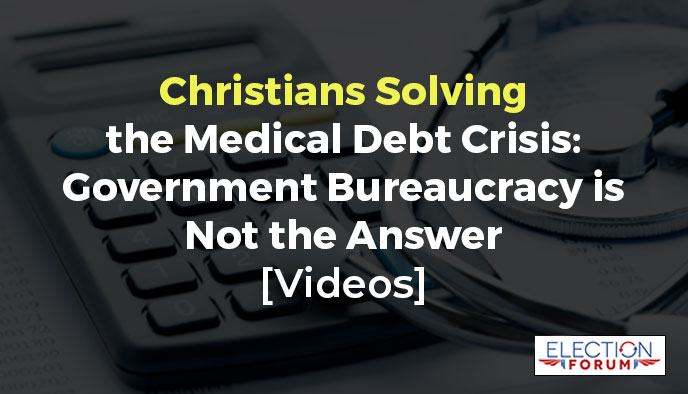 Medical debt is one of the greatest problems facing Americans today…

It causes thousands to declare bankruptcy every year.

It’s one of the top issues voters are concerned about for the 2020 elections.

There are two different philosophical, political, and economic approaches to addressing this problem:

1. The American solution of volunteerism and freedom.

This approach believes individuals and the private sector – without the coercion or force of the government – is able to solve problems and derive better solutions.

No bureaucracy. No forced taxation. No unfair regulation.

2. The socialist solution of government intervention.

This point of view that says government is the answer to solving every problem.

America faces these two important, philosophical, political and economic decisions on many issues…

The debt payoff freed 4,229 families within a 20-mile radius of the church from their medical debt bondage.

Senior Pastor Stephen Hayes called the debt forgiveness a “Tetelestai Miracle,” saying it’s “a familiar message to Christians and an effort the church should champion.”

The Greek word tetelestai was the word tax collectors in New Testament times would use when a taxpayer’s bill was paid in full. It was also written across the conviction notice of a prisoner after he had served his time and was released from prison.

Tetelestai means “It is finished,” or “Paid in full.”

It’s the same word Jesus shouted from the cross just before he died to pay the debt for our sins.

Covenant Church in Dallas isn’t the only church actively helping people erase their medical debt. Here are a few others:

The generosity of church congregations to help eliminate medical debt will only increase. These examples are just the tip of the iceberg.

Americans are the most generous people in the world in helping those in need.

Watch this video about Covenant Church in Dallas (3 ¾ minutes).

Watch this 3-minute video about how the nonprofit RIP Medical Debt partners with churches to buy medical debt from collection agencies and pay it off for pennies on the dollar.