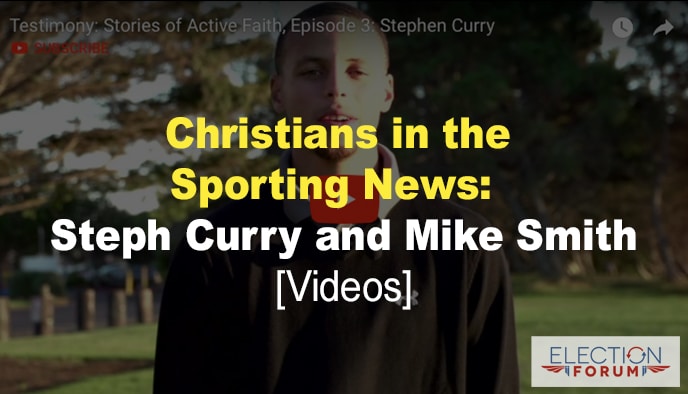 He just led his team to a 4-game sweep of the Cleveland Cavaliers to win Golden State’s 3rd NBA title in the last 4 years.

In 2016, Curry became the first player in NBA history to win the Most Valuable Player (MVP) award by unanimous vote … after he had also won the MVP award the previous year.

Watch this video of Steph Curry sharing his testimony (3:40):

At 52 years of age, Smith became the oldest jockey to ever win the Triple Crown.

He has also won the most Breeder’s Cup races of any jockey (26) … and was inducted into the National Museum of Racing and Hall of Fame in 2003.

Immediately after winning the Belmont Stakes – and the Triple Crown – Smith thanked his “Lord and Savior Jesus Christ” for blessing him and for giving him the victory in the race.

Watch this short interview with Mike Smith as he warms down Justify – the 13th Triple Crown winner – after winning the Belmont Stakes (1:10):

8 Comments on “Christians in the Sporting News: Steph Curry and Mike Smith [Videos]”