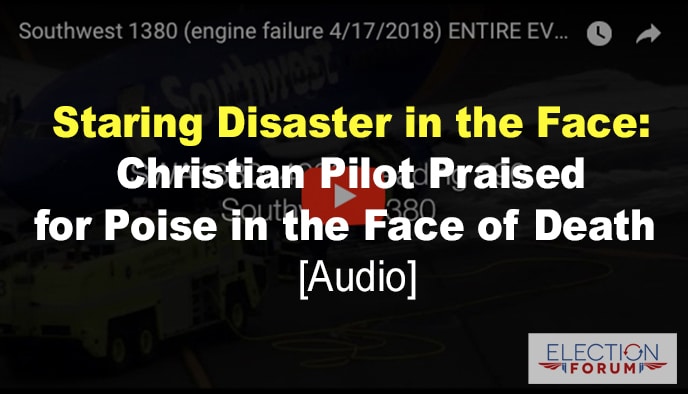 They thought they were going to die…

Without warning, a Southwest airliner dropped 20,000 feet in less than 6 minutes

“She has nerves of steel,” one passenger told the Associated Press.

Most of the media ignored the fact she’s a Christian.

As a committed Christian, she has led children’s ministries … middle school Sunday school … and taught high schoolers and adults at her church.

Southwest Captain Tammie Jo Shults – the pilot of ill-fated Flight 1380 – and First Officer Darren Ellisor said in a released statement that they were “simply doing our jobs.”

“On behalf of the entire Crew, we appreciate the outpouring of support from the public and our coworkers as we all reflect on one family’s profound loss.”

They were referring to the one passenger who died after being sucked out of a shattered window from the waist up when a fan blade on the left engine broke off, causing the engine to partially disintegrate and spray shrapnel against the fuselage and passenger windows.

Captain Shults is one of the small 6.33% of pilots in the commercial airline industry who are female.

When the left engine of her Boeing 737-700 aircraft seized up and stopped operating, the sudden loss of thrust – and the sudden increase in drag – caused the airplane to lurch and quickly roll into a 41-degree left bank.

For passenger comfort, most turns in commercial airliners are limited to 20-degrees of bank or less.

Something unexpected and catastrophic had suddenly happened – and for several moments, no one in the cockpit of the airliner knew exactly what it was…

How was Captain Shults able to remain so calm in the face of such disaster?

One of my employees – a Christian and a former Air Force jet pilot – says there are 2 reasons:

Military pilots are heavily trained in how to handle emergency situations in flight – and are constantly drilled in all emergency procedures during both simulator and in-flight training.

It’s the best flight training available on the planet … and it results in those pilots having 2 important characteristics:

Captain Tammie Jo Shults is a former Navy pilot who was one of the first women ever to fly the F/A-18 Hornet – one of the most advanced military fighter jets of the late 1980s.

She instinctively relied on her military training … and without even thinking about it … followed the first step of every emergency procedure:
Maintain Aircraft Control.

Second, her Christian faith and worldview.

A Christian worldview … which is the same as a biblical worldview … consists of a series of propositional truth claims and beliefs.

Among those beliefs are these:

She knew that as long as the airplane maintained hydraulic pressure, she’d be able to make a safe landing…

After the landing, she stopped the airplane on the runway next to the airport fire truck that had been waiting for her … and texted to a friend, “God is good.”

In a final act of kindness and professional class, Captain Shults walked down the aisle and checked on all the passengers to make sure they were okay … and that the ones who needed medical attention would be taken care of first.

Listen to her calm voice on the radio as she discussed her emergency with air traffic control:

2 Comments on “Staring Disaster in the Face: Christian Pilot Praised for Poise in the Face of Death [Audio]”