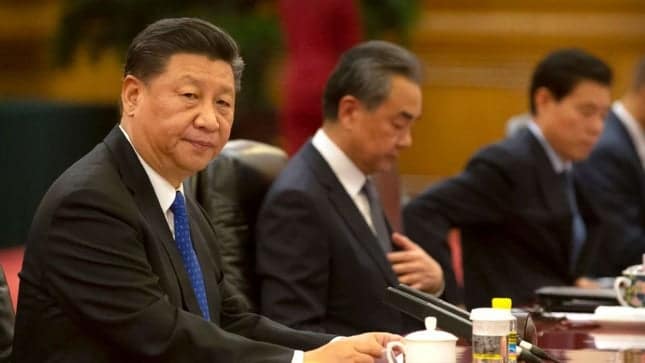 Our greatest threat to freedom, the economy and even life is socialist/communist China.

No other nation is as aggressive, deceitful and sophisticated in destroying America, conquering the world and replacing liberty with statism.

China’s socialist/communist government thought it would get away with the biggest, most deadly cover-up in history.

Under socialism, government controls everything … the media, communication … thinking – they try to create “truth” which consists of the communist party line only. No dissent is allowed.

And that’s what they did with the China Coronavirus.

They covered up the origins.

They refused to allow the truth to come out about human transmission.

They refused to allow worldwide scientists the facts so they could help come up with a cure or a vaccine.

They refused to cooperate.

Doctors in China spread lies that the virus began in the “open market” in Wuhan.

One brave Senator questioned it.

And he was slammed by politicians, media, and others.

I mentioned it on Warning: 9 Disturbing Facts About Coronavirus, Socialism and Your Health… and I was slammed, attacked, and slandered.

But it’s turning out to be true.

China’s President XI and the communist party hid the probability of the National Biosafety Laboratory in Wuhan released – hopefully accidentally – the virus that started the China pandemic.

Here is what we know:

In a Wall Street Journal op-ed this week, Sen. Cotton said: “Beijing has claimed that the virus originated in a Wuhan ‘wet market,’ where wild animals were sold. But evidence to counter this theory emerged in January.

Chinese researchers reported in the Lancet [Medical Journal] January 24, 2020 that the first known cases had no contact with the market, and Chinese state media acknowledged the finding.

There’s no evidence that the market sold bats or pangolins, the animals from which the virus is thought to have jumped to humans. And the bat species thought to carry the virus, isn’t found within 100 miles of The Wuhan National Biosafety Laboratory.

The Wuhan Institute is known to be engaged in research on the Ebola, Nipah, and Crimean-Congo hemorrhagic fever viruses – and, yes, coronavirus variants. And the Institute has clear ties to the “PRC’s (the People’s Republic of China) bioweapon programs.”

Cotton noted further: “Wuhan has two labs where we know bats and humans interacted. One is the Institute of Virology, eight miles from the ‘wet market’; the other is the Wuhan Center for Disease Control and Prevention, barely 300 yards from the market. Both labs collect live animals to study viruses.”

This is not saying the Coronavirus strain that causes COVID-19 was bioengineered. Most think it wasn’t, it’s natural.

But the origin is in the lab. And that’s what President Trump, Secretary of State Mike Pompeo, and many others are now thinking.

President Trump began the U.S. action by stopping Chinese people from traveling to the U.S.

But he was attacked.

Nancy Pelosi said the act was “biased and bigoted restrictions.”

Pelosi declared, “The Trump administration’s expansion of its un-American travel ban is a threat to our security, our values, and the Rule of Law.” (there were 219 House Democrat cosponsors of the No Ban Act).

And, Joe Biden protested, “This is no time for Donald Trump’s record of hysteria and xenophobia – hysterical xenophobia – and fear-mongering to lead the way instead of science.”

They used texting [how did they get people’s cellphone numbers?], Facebook, Google, and friendly media and political allies.

They spread across the U.S. and across the globe the false idea that U.S. military personnel or scientists started the pandemic.

The National Security Council had to issue a special warning telling people to ignore texts saying the U.S. was going to impose martial law.

No country came close to full-on attacks against our businesses and infrastructure.

They have positioned themselves as saving the world from the Coronavirus pandemic.

They are offering to bail out with the debt of countries in order to build their influence.

They try to successfully infiltrate the education system of countries with their Confucius Institute.

They tried to create a monopoly on rare earth metals – essential for warfare.

They have increased their threats on Taiwan (The Republic of China). Their warships have been dominant and aggressive in the Pacific.

They want to destroy the dollar and control the world currency.