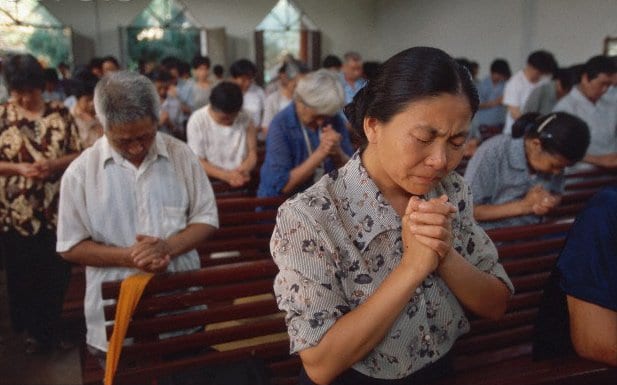 The persecution of Christians in China has dramatically increased.

Communist persecution of Christians – jailing, torture, killing – was at its height in China during the 1960’s horrific “Cultural Revolution”.

But what’s happening today may be worse – far worse.

Let me explain. Here are seven things you should know:

The Chinese government, under the guidance of President Xi Jinping, has escalated the persecution of people of faith with his ‘sinicization’ campaign. “Sinicization” is to recreate all religions to align with the Communist Party of China’s ideology.

The major push against Christians now is what is called “sinicization’.

Sinicization gives the Communist Party a chance to “re-imagine” Christianity with the government or “state” at its center.

It’s goal is to create conformity and loyalty to the state – collectivism at the expense of the individual. Submission, not free choice.

#2. Transforming Christianity into a tool of socialism.

Portraits of Jesus are being replaced by MAO and XI in state-sanctioned churches…and everywhere you look.

Churches were provided with “a model sermon” based on XI’s centenary speech marking the communist party’s 100 year anniversary.

That’s why pastors were instructed to hail, “Long live the great, glorious and correct Chinese Communist Party” in their services.

The persecution of the church in 2021 is escalating.

#4. Brainwashing of children with Communist propaganda.

The distortion of Biblical truth is taught at the public/government-run schools. For example, they twisted and distorted Biblical Stories like this:

John 8 is about how Jesus forgave a woman who had committed adultery.

But the altered socialist version, says Jesus stoned the woman, saying, “I too am a sinner. But if the law could only be executed by men without blemish, the law would be dead.”

Increasing numbers of Christians are being identified and punished by “social credits” that impact school, jobs, and more…and intense surveillance is occurring.

Please pray for the Chinese Christians.

#6. Persecution has increased under President Biden.

This persecution of Christians was going on under President Trump, but not nearly as great. Then Secretary of State Mike Pompeo and Ambassador-at-Large for Religious Freedom Sam Brownback put huge, official pressure on China to free pastors and stop the persecution.

And there was some success.

But under Biden, the persecution has escalated and gone unchecked and ignored.

America is abandoning Christians in China.

Here are a few action steps:

Here is how you can order it:

Read my book, The Christian Voter: 7 Non-Negotiables for Voting For, Not Against, Your Values.

You can order the book on Amazon here.   Or you can order online here, or by phone at 866-382-2226. You can also send a check for $18.84 (includes shipping) payable to Media Specialists and send it to this address:

One Comment on “China 2021: Historic Persecution of Christians is Skyrocketing – 7 Things Every Christian Should Know”