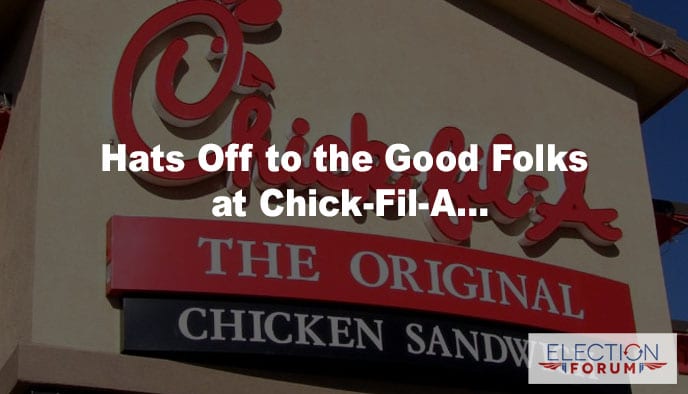 Despite all the criticism …

Despite the fact that the progressive left hates them …

Despite the fact that they stand for Biblical values … they have not compromised.

Living out their faith was seen during the massive blackout at the Atlanta International Airport that occurred last Sunday.

More than 1,000 flights were cancelled as a result of the 11-hour power outage.

Thousands of travelers were literally stranded in dark terminals, with no place to go and with no food to eat or water to drink.

When Chick-Fil-A heard about the situation, they staffed up and saved the day even though it was a Sunday.

As you know, Chick-Fil-A is closed on Sundays. But that didn’t matter in this crisis.

In a statement, the company said, “We immediately mobilized staff and team members who live and work near the airport. And they are making sandwiches and delivering them to the EOC” (Emergency Operations Center).

Even CEO Dan Cathy was there, helping hand out the delicious chicken sandwiches along with bottles of water.

Always feel free to grab a sandwich at Chick-Fil-A … and say thanks for their commitment to Biblical values.