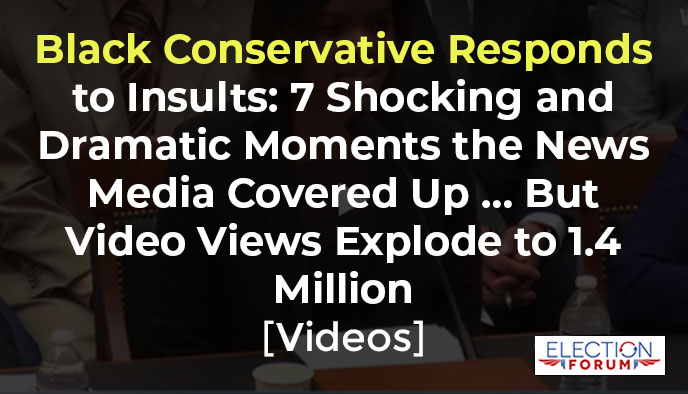 So much so that her next internet video generated 1.3 million views.

Candace Owens took on the most powerful Democrats in Congress … and shut them down.

It was a hearing designed to equate conservatives and Christians with racism, bigotry and white supremacy … and to blame them for the perceived rise in hate crimes.

The Democrat congressmen attempted to trap her with falsehoods and lies about her beliefs.

She didn’t back down. In fact, she turned the tables on them and exposed the Democrat Party as the party of racism and bigotry.

Ms. Owens was testifying at a hearing of the U.S. House Committee on the Judiciary … regarding hate crimes and white nationalism in America.

Here are 7 surprising and powerful things you should know about her testimony:

Most professional politicians assume that black people will always vote Democrat … and the mainstream media supports that theory and encourages that voting behavior.

But Candace Owens has a different view.

“…my main thesis is that black people do not have to be Democrats, and we are not owned by the left,” stated Owens.

“Conservatives are patriots. The president is a patriot; and I’m a patriot, and there is no skin color in patriotism,” she said.

Her answer: “I speak in front of conservatives probably three times a week. I jump on a stage and I say everything pro-black, and they are so supportive, and they applaud. All they want is for black Americans to realize that they are Americans first and foremost.”

On the other hand, she encounters hate speech and threats constantly from the so-called “Antifa” … and by progressives who disagree with her conservative opinions.

“I am willing to fall on a sword a thousand times for [black Americans] to wake up and realize that we are being lied to, abused, and used by the Democrat Party,” she said in probably her most impassioned statement of her entire testimony.

She explained that the Democrat Party wants to keep blacks dependent on government rather than allowing them to become self-sufficient, think for themselves, and reach their full potential in whatever endeavor they choose to pursue.

When questioned about why she supported President Trump, Owens testified that he has done more for black America than the Democrat Party has ever done.

She cited as examples:

After her testimony, one well-known conservative social media personality tweeted:

“No one has ever done what Candace Owens did today.
There is no one like her.
Masterful.”

When Rep. Ken Buck asked her about this, Ms. Owens said, “Purveyors of hate, by his definition, is anybody that supports the president. I support the president because he’s done a tremendous job in helping the black community, despite all of the rhetoric from the media and leftists that do not want him to be successful.”

He played an audio recording of the first 30 seconds of her answer to a question at a speaking event… without revealing the question she was answering … or the context!

Congressman Lieu didn’t even allow Ms. Owens to respond to the audio recording during his own allotted time for asking questions … but another congressman asked for a response later in the hearing.

Ms. Owens responded by saying that Congressman Lieu must think blacks are too stupid to go back and listen to the full clip, including the question and the context in which it was asked … along with her complete answer.

Rather than apologizing, chairman Nadler just shrugged in response.

Owens went on to say – in reference to Rep. Lieu playing an out-of-context audio clip, “That was unbelievably dishonest, and he did not allow me to respond to it, which is worrisome, and should tell you a lot about where people are today in terms of trying to drum up narratives… I’m deeply offended by the insinuation of revealing that clip without the question that was asked of me.”

Candace Owens doesn’t fit the narrative the media and the politicians want you to buy into – the narrative that blacks are victims … and are being held back by white supremacists and white nationalists.

That’s why the mainstream media ignored her day in front of the judiciary committee.

But you don’t have to…

3 Comments on “Black Conservative Responds to Insults: 7 Shocking and Dramatic Moments the News Media Covered Up … But Video Views Explode to 1.4 Million [Videos]”