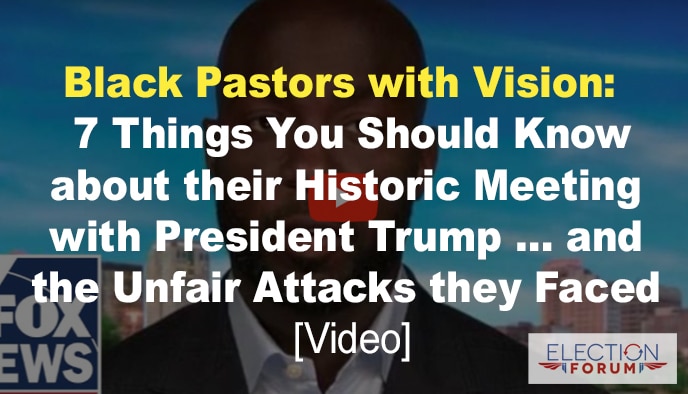 They were criticized for supporting and complimenting a “racist” president…

They were accused of “uncle tomming” by one of their peers…

Their responses were loving … truthful … and powerful.

Among those in attendance were:

One of the harshest critics of those who attended the meeting has been Baltimore Pastor Jamal Bryant, who said:

“Preachers, when you all went around the table, and after you stopped uncle tomming, and thanking him for the privilege to be there, did any of you ask him how it is that he has separated brown and black children and put them in cages like pit bulls?”

When asked to respond to this accusation, Bishop Jackson replied:

“What he doesn’t understand is that you can’t be a prophet to the culture while you’re standing outside of the room.”

Here are 7 things you should know about this historic meeting … and the black leaders who attended:

Some in the room have been long-time Trump supporters … but certainly not all.

Pastor Gray described how he agonized over whether to attend … but after praying and fasting … and asking God if He wanted him to be in the room … he concluded that God wanted him there.

Many of the attendees knew that if they attended, they’d be misunderstood … disrespected … talked about … lied about … but they came anyway.

Because they believe the long-term needs of African Americans – especially those returning to their neighborhoods from prison – are greater than their own short-term needs to preserve their reputation and their credibility.

Pastor Darrell Scott – co-founder of the New Spirit Revival Center in Cleveland Heights, Ohio – said, “President Trump has the potential to be the most pro-black president in my lifetime.”

He went on to say that Trump is the 12th president he’s lived under … and he’s the first who has been proactive toward the black community rather than reactive.

President Trump wants to end this scourge of recidivism … and he wants black pastors and faith leaders to help create real reforms that will work.

The “mainstream” media attacks against President Trump and his agenda have been ruthless and relentless.

It doesn’t matter that his deregulation efforts and the tax cuts have resulted in an economic boom … and historically low black unemployment.

It’s easy to dismiss President Trump as sinful and oppressive … and to take a negative, defeatist attitude about his entire administration.

There are many in both politics and the media who don’t really want government to solve social problems.

Because if problems were actually solved, there would be less of a need for government…

Solutions would put government out of business … and the progressive mind-set is to continually expand the power and size of government.

In spite of the opposition from progressives in media and politics, God’s work forges ahead.

Proverbs 21:1 tells us, “The king’s heart is like channels of water in the hand of the Lord; He turns it wherever He wishes.”

God’s will IS being accomplished … with or without our help.

Even when things are going well, we are commanded in 1 Timothy 2:1-4 to always pray for government leaders:

“First of all, then, I urge that entreaties and prayers, petitions and thanksgivings, be made on behalf of all men, for kings and all who are in authority, so that we may lead a tranquil and quiet life in all godliness and dignity. This is good and acceptable in the sight of God our Savior, who desires all men to be saved and to come to the knowledge of the truth.”

Specifically, we should pray:

Watch Laura Ingraham’s interview with two of the black pastors who met with President Trump … and with a Democratic strategist who opposes the president (9 ½ minutes):

One Comment on “Black Pastors with Vision: 7 Things You Should Know about their Historic Meeting with President Trump … and the Unfair Attacks they Faced [Video]”