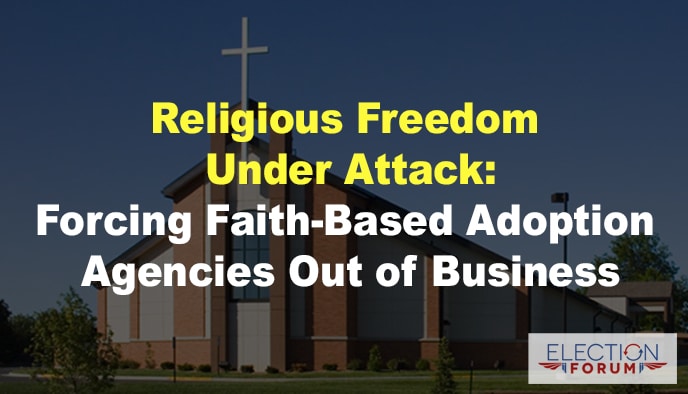 There are more than 1,000 private foster care and adoption agencies in the U.S.

Many of these are faith-based providers that place children only in homes having a traditional married couple consisting of a man and a woman.

In other words, they do not place children with transgender or same-sex couples.

The ACLU is suing the Michigan Department of Health and Human Services – and the Michigan Children’s Services Agency – for allowing the religious adoption agencies in the state to operate according to their religious beliefs.

The ACLU believes that every adoption agency – religious or not – should be required to place children with any qualified couple that applies … even if it means the agency must deny its religious beliefs to comply.

If the courts rule in the ACLU’s favor, many of the private Michigan adoption agencies will be forced out of business.

They will close their doors rather than allow their religious freedoms to be taken away.

This will place a heavy burden on the state to provide foster care and adoption services for the 13,000 children in the state who are waiting for homes.

When Massachusetts declared that all state-licensed adoption agencies must place children in homes of same-sex couples, Catholic Charities in Boston was forced to close.

It had been the state’s leading provider in terms of the number of children placed with adoptive families.

Catholic Charities was also forced to close its business in the District of Columbia for the same reason.

When Illinois passed legislation requiring private agencies to license unmarried and same-sex couples as foster parents … faith-based agencies that refused to comply were unable to renew their contracts with the state.

Alabama, Virginia, South Dakota and North Dakota all have passed legislation allowing faith-based adoption agencies to operate according to their religious beliefs.

If the ACLU is victorious in its lawsuit against the state of Michigan, it will only be a matter of time before they attack the laws protecting religious freedom in other states.
What do you think? Write me at craig@electionforum.org

One Comment on “Religious Freedom Under Attack: Forcing Faith-Based Adoption Agencies Out of Business”