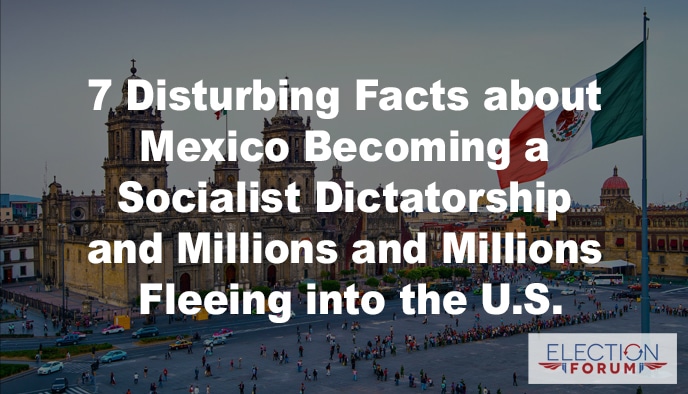 Every American should be very disturbed…

The U.S. could soon see millions of refugees storming across its southern border.

To escape the socialist dictatorship evolving in Mexico.

Here are 7 shocking and disturbing facts you should know about the recent presidential election in Mexico:

Fact #1. The new president of Mexico is a committed socialist.

He will be president for at least 6 years…

He wants to transform Mexico into a socialist country.

The media was optimistic…

They loved Obrador’s rhetoric about:

And they loved the man who called for solving poverty and crime by socializing the economy.

Obrador declared that poor Mexicans should “leave their towns and find a life in the United States.”

He said it’s their “human right.”

The new president has promised to accomplish several socialistic goals:

And he wants friendly relations with Venezuela and Cuba…

But Obrador said the Cuban dictator was “a true social fighter who gave Cuba new independence.”

Here’s what you can expect to happen to Mexico during the 6-year term of President Obrador:

Fact #5. The U.S. and Mexico are headed for a collision course.

All of this will be very bad for the Mexican people…

This will also be very bad for America…

Venezuela is a socialist mess…

The Central Bank of Venezuela hasn’t published inflation figures since December 2015 … when it was 111.8%.

Estimates of the current inflation rate in Venezuela range all the way from 2,349% (the International Monetary Fund) to 27,364% at the end of May this year (Forbes).

No matter how you look at it, Venezuela has suffered a total economic collapse…

After being one of the wealthiest countries in South America, it’s now one of the poorest.

There’s no hope … there’s no opportunity…

It’s a disaster – a preventable disaster – that’s been caused by socialism … and socialist policies.

Fact # 7. Millions of people will flee into the U.S. as Mexico becomes the next Venezuela.

Expect millions and millions of Mexicans to flee to the U.S. to escape increased violence, oppression, economic collapse and chaos.

Mexico will be the next socialist disaster…

3 Comments on “7 Disturbing Facts about Mexico Becoming a Socialist Dictatorship with Millions upon Millions Fleeing into the U.S.”