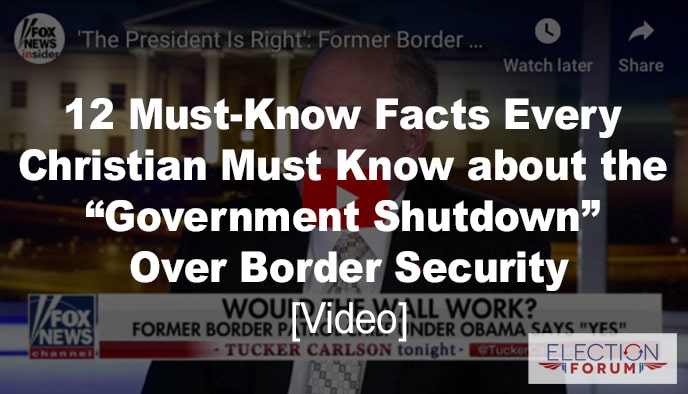 The current government shutdown is not the first of its kind in recent U.S. history… there have been 18 shutdowns since 1976.

But this shutdown may be the first of its kind that has been mischaracterized by omitting the descriptive word “partial.” It’s a partial government shutdown.

Here are 12 facts you should know about the causes and the effects of the current situation:

The following 9 federal departments are impacted by the shutdown:

About 400,000 employees of these departments considered “essential” have been asked to continue working, with pay waiting for the shutdown to be over (ultimately, they won’t be out any money). Most are doing so … but some are calling out sick.

The other 400,000 employees considered “non-essential” are staying home under varying circumstances:

It’s a terrible and unfair hardship for many of these people to be employed, but to not be receiving their paychecks until after the shutdown is over. They are political victims.

But the federal bureaucracy is far too bloated when half of the employees in 25% of the federal government are unnecessary and called “non-essential.”

This shutdown has turned into a Republican vs. Democrat political theater.

The reality is both the Republicans and the Democrats have failed to create good border security and a logical immigration system.

Now, it has spiraled into a Trump vs. Democrat partisan fight.

And, Trump says we are in a crisis. Are we?

For those who want the U.S. to cease to be a sovereign nation – for those who favor globalism and want to move toward a one-world government – lack of border security is not a crisis. In fact, they prefer open borders: they talk about abolishing ICE (Immigration and Customs Enforcement) and CBP (Customs and Border Protection).

For those who want the U.S. to continue to be a sovereign and independent nation, the lack of border security is a crisis on many levels:

In addition to all this, it’s unfair to all the immigrants who followed the rules and came to the U.S. legally.

That’s not what they were saying when 7,000 migrants appeared at the border last November and were denied entry into the U.S…

They are denying the obvious.

They were outraged and up in arms when the DHS (Department of Homeland Security) and the DOJ enforced existing immigration law and separated children from parents or guardians who broke the law and entered the country illegally.

The primary purpose of the federal government is to protect American citizens from evil – both foreign and domestic.

Democrats are closing their eyes to the violent crimes committed across the country by illegal aliens.

It is less than 2% of all the immigrants – but that’s way too many, and border security can help dramatically to stop it.

In the past 2 years alone, ICE officers made 266,000 arrests of illegal aliens with past criminal records. Their crimes weren’t mostly petty misdemeanors. They included:

The vast majority of illegal drugs entering the U.S. come across our southern border with Mexico – 90% of the heroin alone.

The cost to our economy of treating addiction to these drugs is more than $500 billion annually.

Illegal immigrants also cause huge increases in costs for:

The number of illegal immigrants in the U.S. is unknown. Estimates are made based on U.S. census data, supplemental surveys and border apprehensions. The number is likely far more than the 11 million that was estimated in 2016.

Social services in regions having high numbers of illegal immigrants are overloaded beyond capacity.

He talks often about the need for immigrants to fill manufacturing and other jobs at companies that are moving back to the U.S. after having transferred their operations overseas in the past.

I know many – and have friends – who are here illegally.

They are great people. Great for America. But they should have come here legally.

Why didn’t they? Perhaps because the immigration system is broken.

We need a system that will allow good people in and keep MS13 gang members, criminals, and terrorists or terrorist sympathizers out.

The $5.7 billion will pay for 234 miles of a new physical barrier such as steel.

In addition, the president is requesting:

It’s not possible to compromise with Democrats who refuse to negotiate in good faith.

Democrats haven’t proposed any funding at all for border security – much less funding for a physical barrier.

They want to disassociate border security negotiations from the partial government shutdown.

But when President Trump asked the Democrat congressional leaders if they would agree to fund his border security plan if he agreed to end the shutdown, they said they would never agree to fund a physical barrier on the border under any circumstances.

But walls work! Watch this video of the chief of U.S. Customs and Border Protection during the Obama administration discussing the effectiveness of a border wall (3 1/2 minutes).

The Democrats – who still think Donald Trump is an illegitimate president – are determined to prevent him from fulfilling his campaign promise to build a wall on the U.S. – Mexico border to protect American citizens.

They refuse to even consider negotiating in good faith or offering to compromise.

Their funding proposals to end the partial government shutdown feature:

When it suits their purposes and agenda of allowing unrestricted migrants and asylum-seekers into the U.S., the progressives cry “humanitarian crisis at the border.”

But when President Trump uses the “c” word to argue for building a wall to protect the American people, it’s suddenly a “manufactured crisis.”

The Democrats claim “the wall is immoral” while protecting their own homes with walls, fences, gates and armed guards.

The Democrats claim that “walls don’t work” – but they refuse to meet with or interview border patrol agents who know from first-hand experience that they do in fact work.

So now he is racist for wanting a wall to keep illegal drugs, human traffickers, criminals and MS-13 gang members out of the U.S.

This attacks not only President Trump and the wall as racist, but also accuses as racist all who voted for Donald Trump.

Throughout Bible times – and for hundreds of years after – cities erected walls around their borders to protect their citizens.

They were considered essential and practical – not racist.

Deuteronomy 32:8 says that God “established the boundaries of the peoples.”

God also delineated the border of the Promise Land (Numbers 34:1-15).

Regarding the apprehension, incarceration and punishment of illegal entrants into the U.S., Romans 13 summarizes the primary responsibility of government as “a minister of God, an avenger who brings wrath on the one who practices evil.” (Romans 13:4)