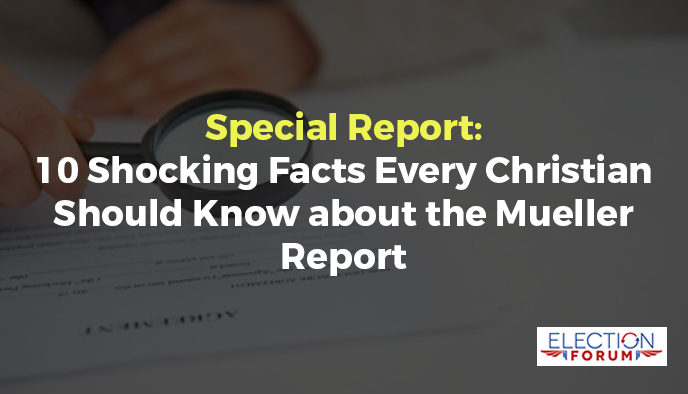 The biased mainstream media and the Democrat politicians are beside themselves over the fact that Robert Mueller’s federal prosecutors and investigators found no evidence of collusion between members of the Trump campaign and the Russian government.

For over 2 years, these anti-Trump zealots have been telling the American people that Donald Trump:

It’s shocking that now that President Trump has been totally cleared of any collusion, coordination or conspiracy with Russia to affect the outcome of the 2016 election, the pro-socialist media and politicians are:

Here are 10 shocking facts every Christian should know about the Mueller Report – including the guilt of the Deep State participants … and what’s next:

Shocking Fact #1: The president was set up and framed.

After nearly 2 years of pre-judgment and proclaiming Trump’s guilt of collusion with Russia, he and his 2016 campaign have been found innocent.

The report states that “[T]he investigation did not establish that members of the Trump Campaign conspired or coordinated with the Russian government in its election interference activities.”

This was despite multiple offers from Russian-affiliated individuals to assist the Trump campaign.

This conclusion is a major disappointment to Russian collusion believers – bringing them to tears, depression … and anger.

Shocking Fact #2: Robert Mueller inserted a “poison pill” in his report by not making a decision about obstruction of justice.

After all the time and resources and tax dollars spent, Mueller passed the buck and left the decision regarding obstruction up to the Attorney General – who didn’t take part in the investigation!

As Attorney General William Barr said in his summary letter to Congressional leaders, the Special Counsel “did not draw a conclusion – one way or the other – as to whether the examined conduct constituted obstruction.”

Mueller certainly could have drawn a conclusion – based on what the law requires to obtain a conviction for obstruction of justice – which would have put an end to the speculations and allegations of criminal wrongdoing by President Trump … and would have put the entire nation at rest.

But Mueller and his top prosecutorial assistant Andrew Weismann deliberately chose not to.

Because they wanted to leave an open door for Congress to impeach the President.

The law is very specific as to the 3 facts that must be proven beyond a reasonable doubt to establish an obstruction-of-justice offense.

In his summary letter to Congress, William Barr wrote: “Rod Rosenstein and I have concluded that the evidence developed during the Special Counsel’s investigation is not sufficient to establish that the President committed an obstruction-of-justice offense.”

No doubt this conclusion will cause a firestorm of protests from Democrats who are desperate to see President Trump charged with a criminal act for which he can be impeached.

Shocking Fact #3: The Mueller investigation was extensive, deep … and complete.

Remember … it started as an investigation into Russian meddling in the 2016 election. Then it expanded to include:

Robert Mueller hired 19 lawyers/federal prosecutors – all of whom were Democrats … and Hillary Clinton supporters.

He had the best of the best at his disposal – with no budget and no time limit for finishing their investigations.

The media made light of the overwhelming bias of the federal prosecutors against Donald Trump and for Hillary Clinton. Here are some other facts about the investigation the media hasn’t told you:

Robert Mueller indicted 34 individuals and 3 companies during the investigation. Most of these were Russian agents or companies – and none of the indictments had anything whatsoever to do with American citizens colluding with Russia to influence the 2016 election.

Shocking Fact #4: The President was set up and targeted by corrupt Deep State bureaucrats.

The list of Deep State bureaucrats who set up and targeted Donald Trump to prevent him from being elected President … and to drive him out of office after he was unexpectedly elected … is a long list. Here are just a few of them:

Interestingly, now that portions of the Mueller Report have been revealed to Congress – and therefore to the general public – Mr. Brennan is walking back his vicious attacks on Trump, saying, “Well, I don’t know if I received bad information, but I think I suspected there was more than there actually was.”

Karl Marx said in his Communist Manifesto, “Accuse your enemy of doing what you are doing as you are doing it, to create confusion.”

Ever since it became clear that Donald Trump was going to become the GOP nominee for president in the 2016 election, the Deep State bureaucrats have been experts at applying Marx’s philosophy.

Shocking Fact #5: The FBI/CIA/NSA corruption and abuse of power has been historical and unprecedented.

Then there was the unmasking of names of U.S. citizens legally communicating with foreign government agents by National Security Adviser Susan Rice…

And there was the deceptive obtaining of FISA warrants to spy on former Trump foreign-policy advisor Carter Page … based on the phony “Steele dossier.”

I warn of these abuses of intelligence agency power in Chapter 5 of my book, The Deep State: 15 Surprising Dangers You Should Know.

Never before have U.S. intelligence and law enforcement agencies so abused their constitutionally-granted authority for the purpose of advancing their Deep State agenda.

The secret court spying on American citizens must be fully exposed and stopped.

Shocking Fact #6: A new Special Counsel needs to be appointed by the Attorney General to determined how and why all of this happened.

Senator Lindsey Graham – among others – is calling for a new Special Counsel to investigate the investigators.

Those guilty of unfairly and without evidence or substantiation accusing President Trump and the Trump Campaign of colluding with the Russian government need to be rounded up and punished.

To deter future politically-motivated “witch hunts” – looking for a crime when there is no evidence that a crime has been committed.

Shocking Fact #7: It’s still not over. The Democrats and their media cheerleaders won’t stop lying about President Trump.

They are jumping all over the statement in the Mueller Report saying, “…while this report does not conclude that the President committed a crime, it also does not exonerate him.”

This is all they need to continue going after the president until the 2020 election – and beyond, if Trump wins a second term.

Shocking Fact #8: The Mueller Report finding that there was no collusion with Russia completely debunks the allegations of the Steele dossier.

The memos in the so-called “dossier” alleged a highly organized, well-developed and coordinated conspiracy between the Trump campaign and the Russian government to influence the 2016 election…

The dossier also alleged that:

Rep. Eric Swalwell (D-CA) insists he has personally seen evidence of collusion between the White House and Russia.

Shocking Fact #9: People’s lives have been destroyed by the Mueller investigation.

President Trump’s former foreign policy adviser Carter Page – even though he was never charged with committing a crime – has received hundreds of death threats since he was accused of being a “Russian asset” at a House Intelligence Committee hearing in 2017.

Mr. Page told the Washington Times, “It’s a life or death situation. I can’t walk out on the street because of the threats.”

Michael Caputo – a communications consultant who worked on the Trump campaign – was also falsely accused of being Vladimir Putin’s “image consultant.”

“That comment changed our lives forever,” Caputo said. “When this is over – it is ever over – where do I go to get my reputation back? There is no office of reputation restoration.”

Other innocent associates or supporters of President Trump are facing:

Shocking Fact #10: One good outcome of the investigation: An awareness that we must guard against foreign meddling and interference in our democratic elections and institutions.

On the plus side, we now know that Russia, China and other enemies of democracy are actively carrying out coordinated attacks against our democratic electoral process.

On the negative side, we have yet to come up with a strategy – much less a solution – to the ongoing attacks.

Department of Homeland Security Secretary Kirstjen Nielson warned recently that the U.S. is “not prepared” to handle cyberattacks from foreign countries…

“It’s not just U.S. troops and government agents on the frontlines anymore,” she said. “It’s U.S. companies. It’s our schools and gathering places. It’s ordinary Americans… your average private citizen or company is simply no match against a nation state such as China, Iran, North Korea, or Russia. It’s not a fair fight and until now our government has done far too little to back them up.”

What can you do? Here are 4 suggestions:

2 Comments on “Special Report: 10 Shocking Facts Every Christian Should Know about the Mueller Report”