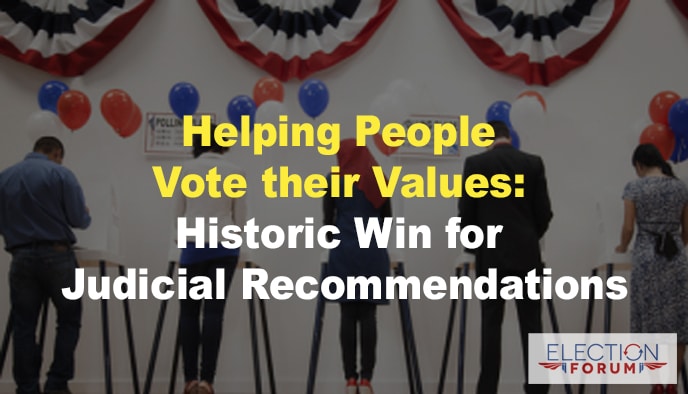 Our web site, judgevoterguide.com, was instrumental in electing many of the superior court judges in the June 2018 primary election.

In fact, the endorsed candidates in judgevoterguide.com received a higher percentage of wins than any time it its history!

We have been researching, evaluating and recording the character qualities of judges since 1998. Our recommendations have helped give the edge to many candidates that were in close races.

We saw 70% wins for those who were endorsed candidates that either won the election outright (more than 50% of the vote) or qualified for the runoff by finishing in the top two out of all the candidates on the ballot.

Because many of the recommended candidates who won didn’t have as much money for the election as the well-funded progressive judicial activists.

We are battling many progressive groups that want to gain control of the court system … and while they had some successes – 30% – they largely failed.

The tide has begun to turn … as strict constructionist judges were elected that will interpret the law, not legislate from the bench.

The next election will be in November … in which the state supreme court, appellate courts, and runoff superior court races will be on the ballot.

If you’d like to help us win in November, your contribution can help turn America around.

Or send a check to: