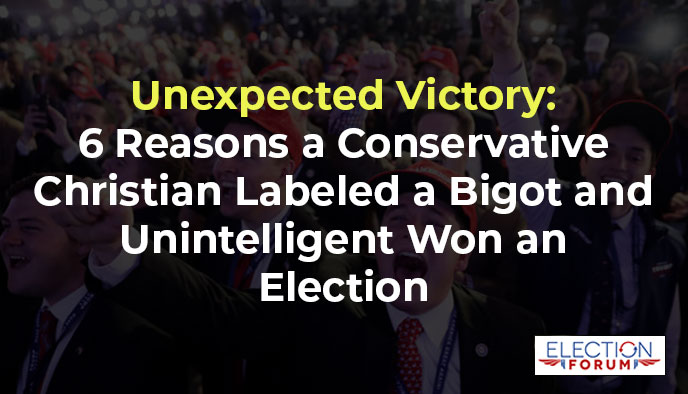 The politicians and the press were shocked…

Both Democrats and Republicans couldn’t believe it.

A conservative Christian won a Wisconsin Supreme Court seat in a special election.

Here’s how he won even though he wasn’t supposed to.

The 6 tactics below could stop a blue tsunami in 2020.

Reason #1: The Christians joined the Republicans to get out the vote.

Instead of Christians staying home and not voting like they did in the massive Wisconsin midterm election loss of 2018 in which the socialist Democrats won – even defeating Christian and conservative Governor Scott Walker – the Christians, Republicans and conservative/libertarians mobilized, organized and purposefully got people to the polls.

Because of the assault on all Christians leading up to the special election.

Reason #2: The assault on Christians was grievous.

He was trashed, insulted and smeared just for being a Christian. He was called a bigot and a “hater outside the mainstream.”

He was attacked for:

The media accused him of speaking before a “hate” group.

ADF has been falsely labeled a “hate” group by the corrupt Southern Poverty Law Center.

Reason #3: The Christians and the churches mobilized to get out the vote.

The pastors were not silent.

They spoke out against the unfair attacks. They asked their churches to unite and vote for religious liberty.

Christians went door-to-door and got people from their churches to the polling places.

And it changed the election outcome.

Reason #4: They didn’t give up, despite the polls and the money.

The polls said Neubauer would lose badly. His own polls said he was behind by th high single digits. Democrat polls had him behind by double digits.

The judicial activists outraised and outspent Hagedorn by almost a third.

Reason #5: They were not intimated by business donation tactics.

The socialist Democrats and the LGBTQ+ organizers did an excellent job of mobilizing their databases to contact – and threaten – key business groups supporting Hagedorn.

They also used digital media to bombard the companies and their PACS with targeted messages.

The groups got scared and backed down. They didn’t donate … and in fact even withdrew donations.

For example, the Wisconsin Realtors Association requested their donation back! The U.S. Chamber of Commerce didn’t donate, even though in the past they supported strict constitutionalists over judicial activists.

Reason #6: When the church and conservatives/libertarians unite, they can win.

At stake: could a Christian win?

The revolt against the intolerance and bigotry of the socialists was powerful. They won because they mobilized a purposeful get-out-the-vote campaign.

3 Comments on “Unexpected Victory: 6 Reasons a Conservative Christian Labeled a Bigot and Unintelligent Won an Election”