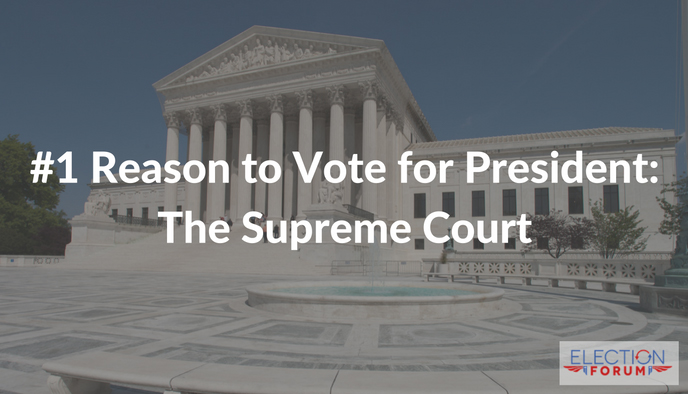 The Supreme Court … its liberal justices are transforming America for the worse.

If nothing else concerns about you about Election 2016, then you need to be concerned about who the next President will nominate to replace the upcoming retirements on the Court.

Three to four new Supreme Court justices will be appointed for life.

Or they will be strict constructionists (SC), justices who are more conservative and want to interpret the Constitution, not make new laws.

The Supreme Court (Scalia, second from the left seated, has passed away)

Trump also has a litmus test:  pro-life, and he published a list of 10 qualified strict constructionists who he would appoint to the Supreme Court

Notice that five justices are past retirement age (65 years old).

Environmental regulations, invasions of our privacy—all of it would pass under a Clinton-dominated Court.

Abortion would be expanded to any time, and taxpayers could be forced to pay for these murders.

Please keep in mind that there are crucial judicial races to watch and vote for, too!

If you live in any one of these counties, download the voter guide hyperlinked to find out how to vote in the upcoming November Election:

Let me know your thoughts. Email me at craig@craighuey.com.

4 Comments on “#1 Reason to Vote for President: The Supreme Court”